Japan has asked the Netherlands to take "practical measures" against a Dutch-registered anti-whaling vessel. The boat collided with a Japanese whaling ship off Antarctica over the weekend. Both sides have traded blame. 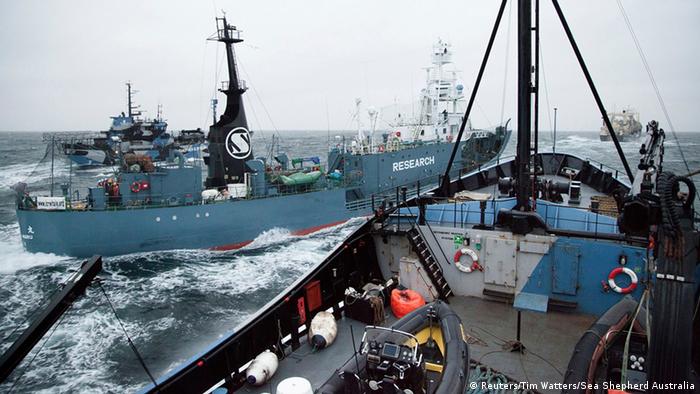 Japan's government condemned the actions of the anti-whaling protest boat on Monday in the latest twist in the long-running battle between conservationists and whalers.

The spokesman said Japan had urged the Netherlands to take "practical" measures to prevent a recurrence of Sunday's collision.

Sea Shepherd claim the Japanese vessel was responsible for the incident. The group alleged the Japanese ship hit their boat, the Bob Barker, in an effort to drive them away.

It said the harpoon vessel had spent hours prior to the collision dragging steel cables across the bows of the Sea Shepherd's ships in a bid to damage the rudders and propellers.

It was an "unprovoked attack" by the Japanese harpooners, carried out in a "ruthless" fashion, Bob Barker Captain Peter Hammarstedt said.

No one was injured in the incident, although both boats sustained minor damage.

The Bob Barker is named after the host of the US game show "The Price Is Right," who has donated millions of dollars to the group.

Australia's Environment Minister Greg Hunt ordered an investigation into the collision on Monday, issuing a warning to both groups.

"Everyone must abide by the law and, of course, if there is evidence that either party has breached international maritime law, we will raise it."

Japan is legally permitted to hunt whales in Antarctica for scientific purposes under an exception to a 1986 ban on whaling. The country is reportedly planning to kill roughly 1,000 whales this year.

"Our research whaling is a legitimate activity allowed under the international treaty. Sea Shepherd's violent sabotage against it, which is threatening the lives of the Japanese crewmembers and causing damage to our ships and equipment, cannot be tolerated," the national Fisheries Agency announced in a statement.

Critics say Japan's whaling program is a guise for commercial whaling, as meat not used for study is sold as food.

Australia has appealed to the UN's highest court to outlaw the program. The International Court of Justice is expected to issue its decision later this year.