Days of heavy rains in southern Japan have triggered devastating landslides and flash floods, killing nearly 60 people. About 3.6 million people have been advised to leave their homes across the country. 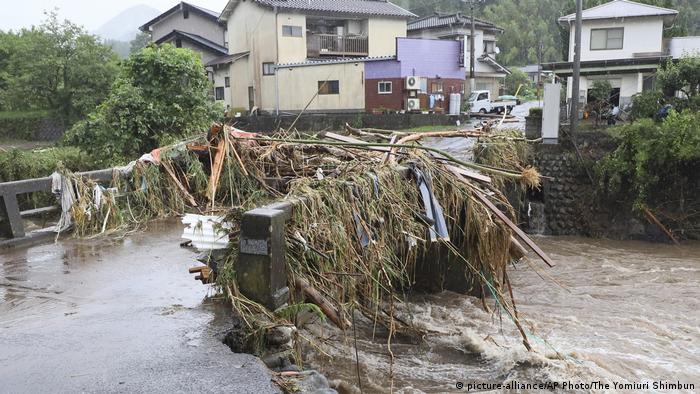 Heavy rains continued to batter large parts of Japan's southern region on Wednesday, causing rivers to burst their banks and hillsides to collapse.

The heavy rainfall, which began early Saturday in southern Japan, was moving toward the northeastern parts of the country.

"In these areas, heavy rains are at an unprecedented level," a JMA official said. "Especially in areas designated as high risk for landslides and flooding, the possibility is extremely high that some kind of disaster is already happening," he warned.

At least 58 people have died in several days of flooding and mudslides – most of them in the hardest-hit Kumamoto prefecture. Several casualties were reported in Fukuoka, a prefecture on Kyushu, Japan's third-largest island. The death toll was expected to rise.

Search and rescue operations continued in Kumamoto, where 14 people are reportedly missing. Tens of thousands of troops, police and other rescue workers have been mobilized to carry out these operations, which have been severely hampered by the rains, flooding, mudslides and disrupted communications.

The Japanese government also advised some 3.6 million people across the country to evacuate their homes and move to safer places.

Authorities admit the coronavirus has complicated evacuation efforts in the most-affected parts.

Some people prefer to sleep in cars rather than risk infection at shelters, according to local media. At some facilities, people have set up cardboard walls to separate families and try to reduce the risk of catching the virus.

Kazuhiro Tateda, president of the Japan Association of Infectious Diseases and a member of the committee set up by the government to combat the spread of the coronavirus, says there is good reason to be worried about the virus.

Japan has so far recorded over 20,000 coronavirus cases and nearly 1,000 related deaths, but there has been an uptick in COVID-19 cases in recent days. Health authorities in Tokyo reported 106 new infections on Tuesday, the sixth consecutive day that the count has been above the 100 threshold.