Exports have fallen the most since the global financial crisis, leaving policymakers scrambling to jumpstart the world's third-largest economy amid weak demand from neighboring China and other major markets. 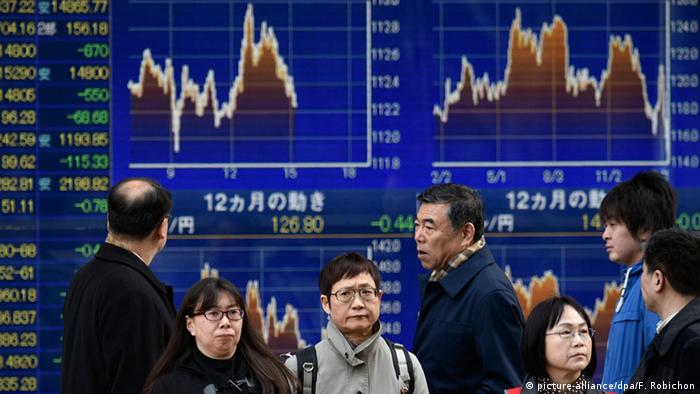 Exports to China plunged a full 17.5 percent to 860 billion yen ($ 7.6 billion, 6.8 billion euros), as the anemic state of the world's number two economy continues to affect budgets worldwide. It was the sixth consecutive month of decline in shipments to Japan's largest trading partner.

"Slowing growth in the mainland (China) economy is clearly taking its toll. Unfortunately, we see few signs that growth is bottoming out," HSBC co-head of Asian economic research Frederic Neumann said in a note to clients.

Exports to the US were also down, shedding 5.3 percent to 1.13 trillion yen, with exports of steel down 44.2 percent and those of car parts losing 13.5 percent, the ministry said.

The January slump marks the biggest drop since October 2009 when the global financial crisis knocked demand across the world.

But the flagging state of the global economy isn't just hurting exporters. Japan's overall imports also tumbled 18 percent to 6 trillion yen, with demand for liquefied natural gas and petroleum slipping by more than 55 percent and nearly 44 percent respectively. Since the 2011 nuclear disaster at Fukushima, the country has increasingly relied on outside resources to keep its engines running.

The double whammy resulted in a trade deficit of 646 billion yen for the first shortfall in two months.

The latest data adds to growing concerns that Japanese authorities are increasingly left with few options to revive a stumbling economy even as the Bank of Japan remains proactive in policymaking, shocking markets last month by adopting negative interest rates to spark momentum.

The country's economy contracted an annualized 1.4 percent in October-December. While analysts expect a return to moderate growth in the current quarter, sluggish exports and weak consumer spending underscore the difficulty policy makers have in putting the economy back on track.

"Japan's January trade figures were woeful... This is more fodder for those who think Japan's economy is a disaster waiting to happen," Chris Weston, Melbourne-based chief market strategist at IG, wrote in an email to clients.