The Nobel Committee has awarded the 2018 Nobel prize in medicine to James P. Allison and Tasuku Honjo for their research into how the immune system can combat cancer. 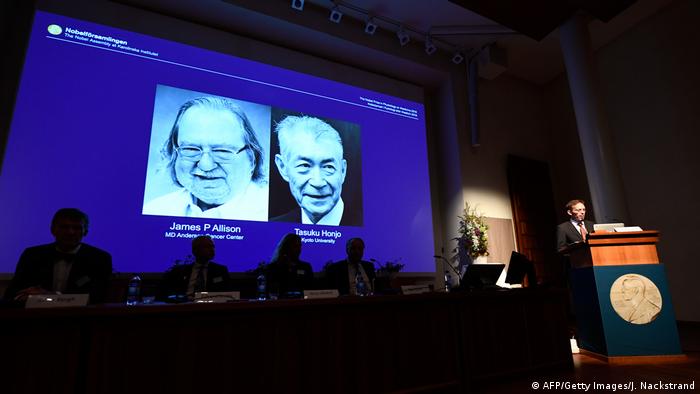 Immunologists James P. Allison and Tasuku Honjo were jointly awarded the 2018 Nobel Prize in medicine for their work on cancer therapy, the Nobel Committee announced in Stockholm on Monday.

The discovery made by the two laureates "constitutes a landmark in our fight against cancer," the committee tweeted shortly after the announcement. Research by Allison at the University of Texas in the US and Honjo at Japan's Kyoto University explored how the body's immune system can be harnessed to attack cancer cells by releasing the brakes on immune cells.

"Allison and Honjo showed how different strategies for inhibiting the brakes on the immune system can be used in the treatment of cancer," the Nobel Assembly at Sweden's Karolinska Institute said as they awarded the prize of 9 million Swedish crowns ($1 million, €872,000).

Allison's work explored how a protein can function as a brake on the immune system, and how the immune cells can combat tumors if the brake is released. Meanwhile, Honjo separately discovered a second protein on immune cells that also acted as a brake but with a different mechanism. By releasing that brake, Honjo's research had found a "strikingly effective" treatment against cancer.

Medicine is the first of the Nobel Prizes to be handed out each year.

The Nobel Prize for physics is set to be announced on Tuesday. According to Swedish public radio SR, the award may be given to researchers working on what are known as "zero dimensional quantum dots — tiny semiconductor particles that work in data communications, light diodes, solar cells and medical imaging.

Capping off the science prizes, the award for chemistry will follow on Wednesday. SR said recurring favorite John Goodenough, a 96-year old electrochemist, could be given the nod this year. Goodenough's work led to the invention of the rechargeable lithium ion battery used in cell phones, computers and electric cars.

The Nobel Peace Prize will be awarded in Oslo on Friday, while the announcement of the economics prize will cap off this year's Nobel season on October 8.

No prize for literature will be handed out this year after Frenchman Jean-Claude Arnault, who is married to a member of the Swedish Academy's, was charged with rape. He was sentenced to two years' prison on Monday.

Nobel Prize in Medicine: What makes our internal clock tick

Three Americans were awarded the Nobel Prize in Medicine for discovering how our bodies adjust to the rhythm of day and night. It's all down to a few proteins. And yes, the proteins also give us that terrible jetlag. (02.10.2017)