Jailing of French-Vietnamese blogger sparks international outcry | Asia | An in-depth look at news from across the continent | DW | 12.08.2011

The EU has called on Vietnam to respect freedom of expression and release a French-Vietnamese blogger jailed earlier this week. Media rights activists have demanded Vietnam put a halt to 'Chinese-style' censorship. 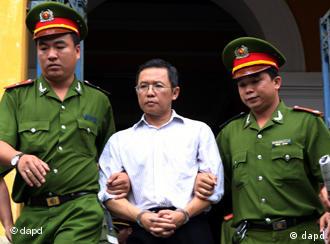 Pham Minh Hoang has already spent one year in custody

On Wednesday, Pham Minh Hoang became the latest pro-democracy activist to be jailed in Vietnam in the past two years since the government launched a crackdown on free expression.

The blogger and lecturer, who holds dual citizenship, was sentenced to three years' imprisonment after being convicted of "attempted subversion."

Hoang has already spent one year in custody, which will count towards his jail sentence. This will be followed by a further three years of house arrest.

European Union foreign policy chief Catherine Ashton demanded on Thursday that Vietnam respect freedom of expression and release the blogger, who is an EU citizen.

'Blackening the image of the country' 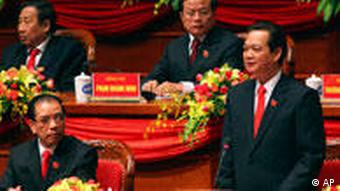 At the end of the half-day trial in Ho Chi Minh City, the chief judge said that the 56-year-old had "undermined national security." Pham Minh Hoang, who uses the penname Phan Kien Quoc, was also accused of "blackening the image of the country" in 33 articles that he voluntarily handed over to the court.

The EU citizen, who left Vietnam to study in France in 1973 and returned in 2000 to lecture in mathematics, said he was never aware he was violating the law. He expressed regret and asked for leniency in court.

"My writings were not aimed at overthrowing anyone," he added. "I only pointed out the negative things in society, and I think the country needs to be more democratic."

Huong also admitted that in 1998 he had joined the US-based opposition group Viet Tan, which describes itself as non-violent and pro-democracy that the Vietnamese authorities have labelled "terrorist."

However, he denied charges of recruiting members for the group. He only said he had gone to Malaysia in November to attend a course on non-violent methods of protest, and that he had organized a course for students in Vietnam on how to help them improve their lives and work in a team. 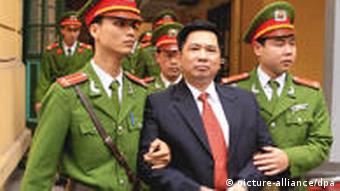 In a reaction to the verdict, Viet Tan - the Vietnam Reform Party - said that Hoang had engaged in peaceful activities that aimed to improve Vietnam.

Hoang has fallen victim to a "dangerous trend in Vietnam towards ‘Chinese-style’ censorship," Reporters without Borders said on Wednesday. Prime Minister Tan Dung, who has just been handed a second term, "has instigated a crackdown that bodes ill for journalists, bloggers and free speech defenders."

"He's a normal citizen, like you and me," Gilles Lordet from the Paris-based watchdog told Deutsche Welle. "He's written about sensitive issues, about economics and political actuality in Vietnam. But he's not a dissident."

"In the Vietnamese constitution, they do have freedom of speech. But since the end of 2008, the Communist Party has been harsher in their crackdowns on the Internet," Lordet added.

"There are currently 17 bloggers in Vietnamese jails," he said. "The Hoang case is very bad publicity for the country."

Vietnam is ranked 165th out of 178 countries in Reporters without Borders' press freedom index.

Earlier this month, an appeals court in Hanoi upheld a seven-year jail term against the French-trained legal expert and blogger Cu Huy Ha Vu, who wrote about democracy and pluralism and twice tried to sue the prime minister. When the US and the EU expressed concern over the ruling, the Vietnamese Foreign Ministry responded by saying there were no "prisoners of conscience" in Vietnam.

Cu Huy Ha Vu has been sentenced to seven years prison and an additional three years of house arrest on charges of spreading "anti-state propaganda." The ruling came after a one-day trial. (05.04.2011)

The International Federation of Journalists (IFJ) says Beijing hasn't kept its promise to gradually relax restrictions set before the 2008 Olympics. (02.02.2011)

Vietnamese in Germany speak out against China

As Vietnamese people have been strongly protesting the Chinese government over a maritime dispute in the South China Sea, Vietnamese in Germany are ready to do anything they can to protect their motherland’s sovereignty. (21.06.2011)