Raif Badawi has started a hunger strike protesting against new prison conditions, according to his wife. Ensaf Haidar said her husband has been on strike since Tuesday; she pleaded for him to be pardoned. 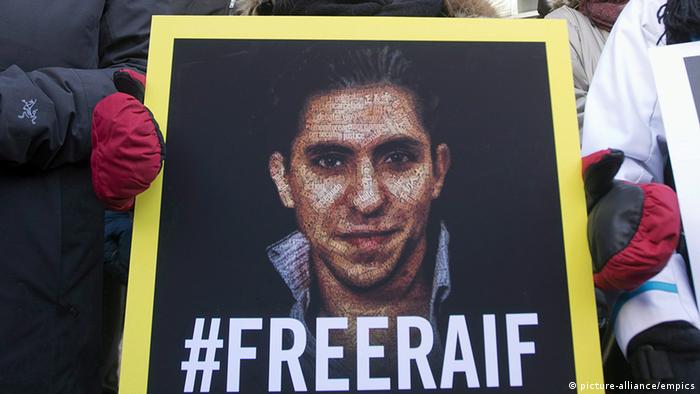 Haidar tweeted on Thurday that Badawi had begun his hunger strike after being transferred to a new isolated prison.

An identical post appeared on Badawi's own Twitter account. Following her tweet that Badawi was on hunger strike, Haidar - who has been granted political asylum in Canada along with the couple's three children - called on Saudi Arabia's King Salman to issue a pardon for him.

Badawi, who had made online appeals for an end to the influence of religion on Saudi public life, was found guilty in 2014 of "insulting Islam" and breaking Saudi Arabia's cyber laws. He was sentenced to 10 years in prison and 1,000 lashes. The blogger received his first 50 lashes in January, although that part of the sentence was put on hold after complaints from the EU, the US and United Nations.

Haidar has also called on Canadian Prime Minister Justin Trudeau to issue a safe passage Canadian passport for Badawi. The civic organization Avaaz mounted an online petition campaign in support of her plea.

"We are very concerned about the situation of Mr. Badawi," he said. Asked if Canada was making representations to the Saudi embassy, he said: "We are doing our best to make sure that we will have a positive result in the end."

The human rights group Amnesty said it had confirmed that Badawi had been moved to a different jail "for administrative reasons," but could not confirm that he had started a hunger strike.

Haidar is expected to travel to France to accept the prestigious Sakharov Prize on her husband's behalf in a ceremony in Strasbourg next week. The prize, awarded by the European Parliament, honors freedom of thought.

Badawi was awarded DW's Freedom of Speech BOB award in September this year.

Opinion: Raif Badawi is free, but world must speak out for other jailed journalists 12.03.2022