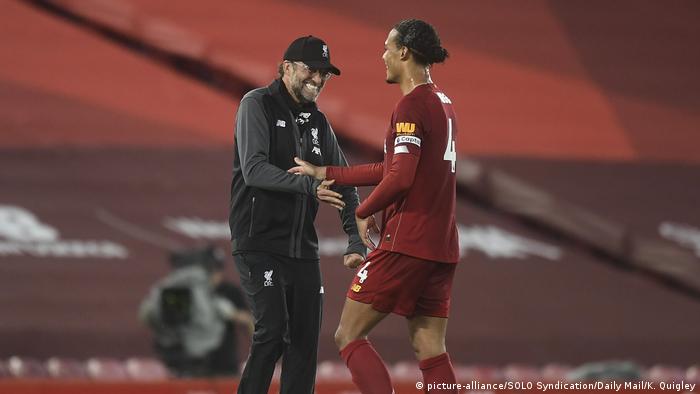 Jürgen Klopp's team now have an unassailable 23-point lead at the top of the table, with seven games to play. It is the earliest any team in Premier League history has ever sealed the title.

Liverpool last won the English championship in 1990 and it's the 19th time the club has won the domestic title, one less than Manchester United.

"It's such a big moment, I am completely overwhelmed," Klopp told Sky Sports.

"Tonight it is for you out there," Klopp said, addressing Reds fans, while urging them not to gather in groups for celebrations. "It's incredible. I hope you stay at home, or go in front of your house if you want, but not more. We do it together in this moment and it is a joy to do it for you."

Players celebrated late into the night, with left back Andrew Robertson sharing some of the scenes on Friday morning.

Kenny Dalglish, who was the last manager to lead the Anfield club to title glory 30 years ago, was effusive in his praise of the current incumbent: "Jürgen has been fantastic and he epitomizes everything that Liverpool Football Club stands for," the Liverpool legend told BT Sport: "He appreciates and respects everybody that works at the club, they've all got a position. So whatever they got they deserve it."

"We'll have a lot more days to look forward to as long as Jürgen's there."

Read more: How the Bundesliga helped the Premier League restart

Liverpool were in scintillating form on Wednesday night after they thrashed Crystal Palace 4-0 to put pressure on Manchester City ahead of City's trip to face Chelsea on Thursday.

The Liverpool result meant only victory would do for Pep Guardiola's team, something they were unable to achieve after goals from Christian Pulisic and Willian saw off City and, with it, any faint hopes they had of retaining their title.

The 2013 Champions League final between Bayern Munich and Borussia Dortmund was one of the greats. As the first all-German final in Europe's premier club competition, it signified the reemergence of German football. (25.04.2020)