The 2013 Champions League final between Bayern Munich and Borussia Dortmund was one of the greats. As the first all-German final in Europe's premier club competition, it signified the reemergence of German football. 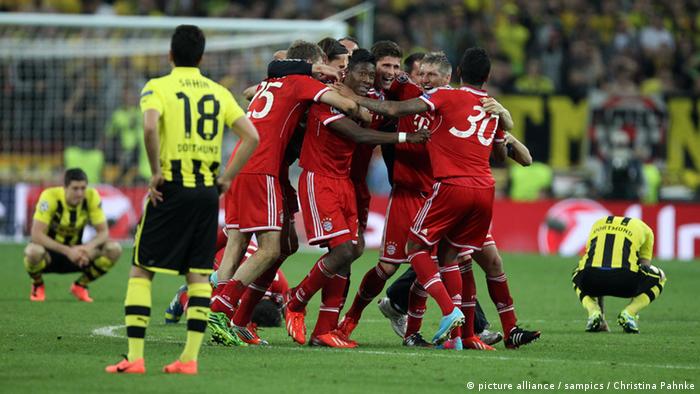 This was German football's moment.

Both Bayern Munich and Borussia Dortmund arrived in this hugely anticipated Champions League final in London having topped their respective groups. Both had beaten Spanish teams, the dominant force in Europe, in the semifinals.

Bayern had dismantled Barcelona 7-0 on aggregate in one of the greatest modern semifinal maulings in the competition's history, while Robert Lewandowski's special four-goal performance in the first leg against Real Madridwas enough to see them through their tie.

Bayern were purring. Philipp Lahm, Bastian Schweinsteiger and 'Robbery' were in the midst of their peak years. And in Jupp Heynckes they had a wise, taciturn leader who was a perfect fit in Bavaria.

The same could be said of his counterpart Jürgen Klopp, a head coach who reignited the fires of passion and had everyone believing. Dortmund were flowing, riding the wave of a special spell in club history and, coming off a domestic double, they represented the exciting upstarts who were full of flair and youth. 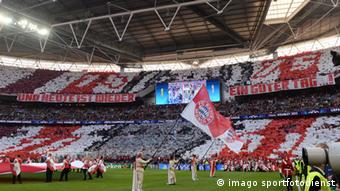 Pre-match in Wembley was breathtaking, if a little OTT at times

With the stage of a European final the biggest possible, the match-up an advertisement of German football, and the added sprinkling of drama that BVB's star Mario Götze (who missed out through injury) would be leaving for Bayern come the end of the season, this was a final to savour.

After a pre-match opening ceremony that included knights fighting with swords and Lars Ricken and Paul Breitner dressed as captains of their respective guards, it was finally time for football.

Dortmund failed to make the most of a strong start, something they would ultimately pay the price for. Both Manuel Neuer and Roman Weidenfeller were in fine form, and Arjen Robben missed a handful of chances, but the real talking point came in the first half when Franck Ribery avoided a booking for a flailing arm that caught Lewandowski. It was one of many turning points, but with Ribery cautioned later in the game, Dortmund fans were left frustrated. 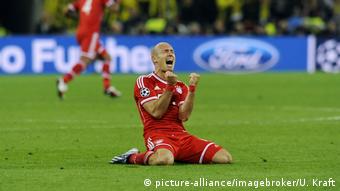 For Arjen Robben, victory, courtesy of his late goal, was sweet after a poor performance in the final the year before

After the break, Bayern's pressure grew and eventually Mario Mandzukic made it count.

With Bayern seemingly in charge and beyond challenge, Dortmund showed their colours to be true when they equalised from the penalty spot after Dante clumsily kicked Marco Reus in the stomach in the box. Even more bizarrely, the Brazilian defender, already on a yellow, avoided a second card, but thanks to Ilkay Gündogan, Dortmund had at least levelled the scores.

With 20 minutes to go, the anticipation of beforehand suddenly turned into overwhelming tension. Not only were Bayern out for European and domestic revenge after a few years of hurt, not only were Dortmund looking to deny Bayern in Europe and sweep up more hearts with their furious football, but this game was also a showcase for German football.

Neven Subotic made a brilliant clearance off the line and then another great, lunging tackle to keep Dortmund in the game. Ribery produced a key interception in his own box before Lewandowski matched the Frenchman's ability to escape a sending off with a tread on Jerome Boateng's ankle. 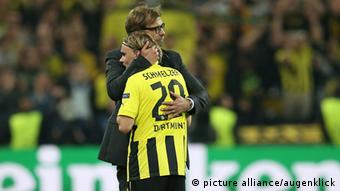 For Klopp, it was a case of so close and yet so far as his side fell agonizingly short

With Weidenfeller keeping Bayern at bay, extra-time beckoned, and many watching on wanted nothing more than to enjoy 30 more minutes of this thrilling game of football.

‘Robbery' had other plans though. In the 89th minute, Ribery controlled a long ball, flicked it on to Robben. The Dutchman snuck through a Dortmund defence stuck in slow-motion to send the ball trickling over the line. The red part of Wembley erupted in elation, the makeshift yellow wall (more arch in shape) crumbled.

For Robben, who had missed an extra-time penalty in the "Finale dahoam” the year before and spurned a number of chances on the night in Wembley, the redemption couldn't have been sweeter. For Lahm and Bastian Schweinsteiger, it was the silverware to legitimise the golden generation label. 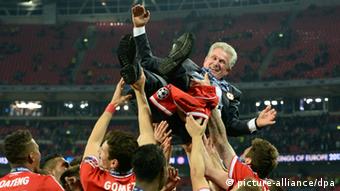 Klopp was gracious in defeat, recognising the magical charm of Heynckes sealing his second Champions League title. By the end of the season, he guided Bayern to a special treble, including a league title won with a whopping 91 points, 98 goals scored and just 18 conceded.

A year later, German football peaked with the national team winning the World Cup in Brazil. This final in Wembley was the springboard.

It came before Bayern had rediscovered their marauding dominance and before the Bundesliga suffered to reveal its hidden delights.

In 2013 in London, Bayern were crowned champions of Europe, as the Bundesliga became everyone's new favorite league.