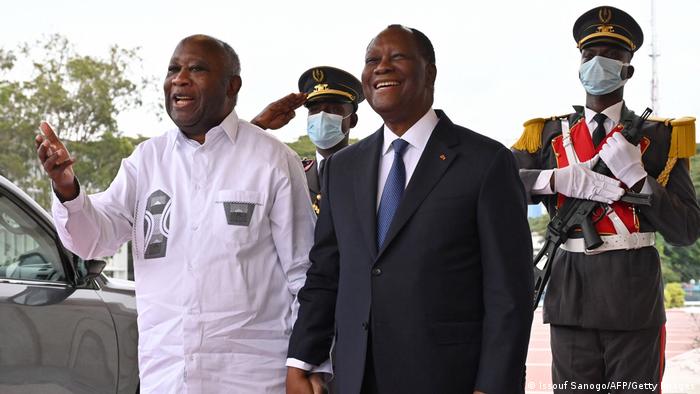 Ouattara welcomed Gbagbo at the presidential palace in Abidjan

It marked the first time Ouattara and Gbagbo met since the Ivory Coast's 2010-11 civil war, which claimed more than 3,000 lives.

The deadly clashes between their supporters began when Gbagbo, who ruled from 2000 to 2011, rejected defeat by Ouattara in a presidential vote.

Gbagbo recently returned home after the International Criminal Court upheld his acquittal on charges of crimes against humanity in the post-election violence.

'Happy to see you'

"I'm happy to see you," Ouattara said as he welcomed the former president at the presidential palace in Abidjan, Ivory Coast's economic capital.

Ouattara said he and Gbagbo agreed to meet during the coming weeks to sort out their differences and put the past behind them.

"We have decided that it is important to restore trust between us so that Ivorians can reconcile and, especially, trust each other," Ouattara said in an announcement following the meeting. 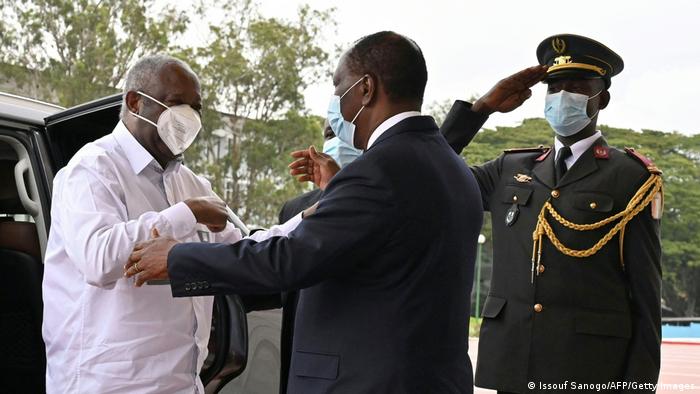 Ouattara and Gbagbo hugged before taking off the protective face masks

Gbagbo said he had called on Ouattara to continue reconciliation efforts by freeing other prisoners from the civil war period.

"I told the president — and you will agree with me — I was their leader and I am out today. They are in prison. I would like the president to do all he can to free them," Gbagbo told a joint news conference.

Ivory Coast's last presidential election, in October 2020, saw Ouattara claim a landslide victory. However, it was undermined by an opposition boycott.

Several people died in clashes with police in the run up to the October vote after Ouattara announced his intention to run for a third term.

Ouattara has so far welcomed and facilitated Gbagbo's return, seemingly hoping it might ease tensions, although his predecessor could ultimately prefer the role of political rival.

Gbagbo rose to power in the 1970s as a left-wing campaigner. He helped end Ivory Coast's one-party system after the country's independence from France.

Although political unrest marked his years in power, Gbagbo still holds considerable grassroots support. He is seen by his supporters as a champion of the poor and oppressed.

While Ouattara's government paved the way for Gbagbo's return, the former president still faces a 20-year prison sentence. He was convicted in absentia of "looting" the Central Bank of West African States (BCEAO) during the civil war.

Although there were no official statements on the matter yet, authorities have hinted that this sentence might be lifted.