Opposition leaders who boycotted Saturday's vote have claimed at least a dozen people died in election-related violence. President Alassane Ouattara is seeking a third term that his opponents say is unconstitutional. 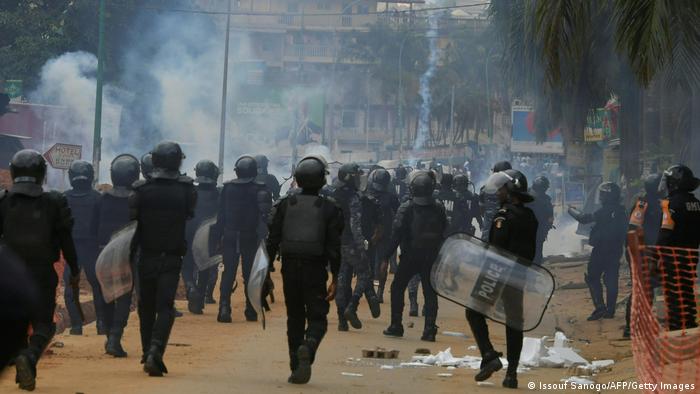 Reuters cited the mayor of the town of Tiebissou as saying four people were killed and 27 injured by bullets and machetes when young armed men from surrounded villages fired on people.

One other person was killed in the pro-Bedie town of Niable, a government official said on condition of anonymity.

Opposition leaders who boycotted Saturday's election say at least a dozen people died. More than 20 others had been killed in the run-up to the vote, human rights groups said.

President Alassane Ouattara's opponents say he is breaking the law by running again because the constitution limits presidents to two terms, and risks shattering the fragile peace that has been in place for a decade.

The 78-year-old Ouattara says he can run again under a new constitution approved in 2016, and is doing so only because his handpicked successor died unexpectedly in July.

Critics say the election outcome was all but predetermined as 40 of the 44 candidates seeking to challenge him were disqualified, including exiled former rebel chief Guillaume Soro and Gbagbo.

Henri Konan Bedie, whose rivalry with Ouattara has marked Ivorian politics for three decades, also called for a boycott and a campaign of civil disobedience to halt or disrupt the election.

On Sunday, the opposition leaders called for a "civil transition," saying they considered Quattara's mandate over after the ballot.

On Saturday, protests degenerated into clashes between ethnic communities who back rival political factions in a poor Abidjan district and in the central-western town of Gboguhe, according to witnesses.

The violence brought back memories of a post-election civil war in 2010-2011 when 3,000 people died after then-president Laurent Gbagbo refused to accept defeat by Ouattara.

Electoral officials have up to five days to release the results. However, Ouattara had taken an early lead by Sunday evening, according to results from 26 of 108 voting departments.

Ouattara was re-elected five years ago with nearly 84% of the vote and has broad international support.

Former Ivorian First Lady Simone Gbagbo tells DW who she thinks is behind events in her country, including the ouster of ex-President Laurent Gbagbo. She calls President Ouattara's run for a third term unconstitutional.

On October 31, Ivorians will elect a new leader. President Alassane Ouattara is running for a third controversial term. The opposition is urging supporters to shun the poll — a political crisis appears imminent.