The leader of Italy's 5-Star movement has vowed to push on after failing to make the second round in local elections in several key cities. The votes are seen as a test ahead of national elections later this year. 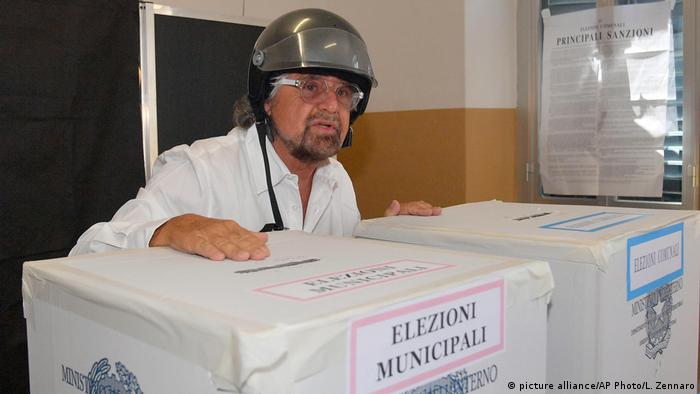 As France prepares for a run-off vote that Emmanuel Macron appears poised to win, his political doppelganger to the south - Italy’s Matteo Renzi - is also likely to clinch a contest. Megan Williams reports from Rome. (29.04.2017)

After cutting ties with the right-wing UKIP in the EU Parliament, Italy's 5-Star Movement no longer has political allies in Brussels. The party's antagonism to the political system has left it with few alternatives. (10.01.2017)

Ten things you need to know about the AfD

DW takes a look at the Alternative for Germany (AfD) party - the newest force in German politics. What is it, where did it come from and what role will it play in the 2017 federal election? Here are all the answers. (16.05.2017)

The new third power in Italian politics, former comedian and populist Beppe Grillo, has predicted financial and political meltdown within months. He said that Italy would have to renegotiate its debt repayments. (02.03.2013)

Its only hope of making the second-round vote on June 25 was in the southern Italian city of Taranto, early results indicated.

"This is a huge defeat for 5-Star," said Matteo Ricci, head of local affairs for the ruling center-left Democratic Party (PD). "Not only are they not making the run-offs, but they are polling disastrous numbers."

"Today shows that a year after its victory in Rome, the verdict on its ability to govern at a local level is negative," Ricci said

The party's leader put on a brave face after the election defeats, vowing never to give up.

"Successes and failures are part of our history. What matters it to never give up," Beppe Grillo, a former stand-up comedian, wrote on the party blog.

Grillo said the M5S planned to win its first regional election in Sicily in November, and would take national power after that. "Our aim is to take over the government," he said.

Sunday's election called on some nine million voters in more than 1,000 towns and cities across Italy, making them a useful gauge months before a parliamentary ballot.

5-Star and the ruling center-left Democratic Party, led by former premier Matteo Renzi, are running neck-and-neck in national polls with around 30 percent support.

But Sunday's results may indicate 5-Star's shine is fading, dashing their hopes to take over the premiership.

After rising in popularity, 5-Star has been beset by local infighting and a series of scandals in Rome and Turin after their candidates won mayoral seats last year.

5-Star may be following the path of other anti-establishment parties across Europe, with the Front National in France, the anti-EU group UKIP in Britain and the Alternative for Germany (AfD) all stumbling in polls.

"The results point to our slow, but relentless growth. But all the front pages are dedicated to the failure of the Five Star Movement," the comedian said, accusing commentators of "gloating" and "deluding themselves" about the looming demise of the M5S.