The new third power in Italian politics, former comedian and populist Beppe Grillo, has predicted financial and political meltdown within months. He said that Italy would have to renegotiate its debt repayments. 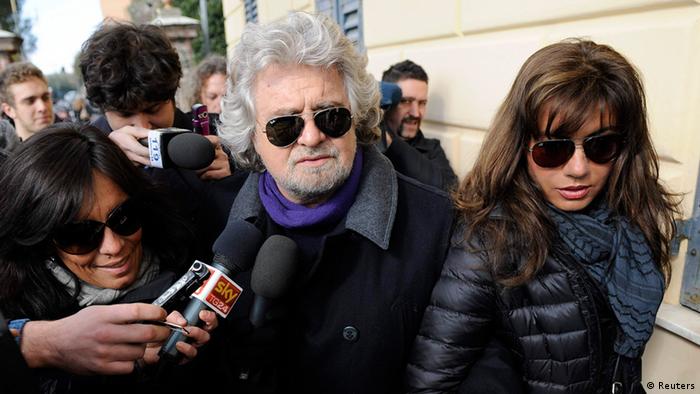 "I'd give the old parties another six months - then it will be all over here," Grillo said in excerpts of the interview released on Saturday ahead of Focus' publication. "Then they won't be able to cover pension payments or public sector salaries anymore."

Grillo, a populist who pledged a referendum on Italy withdrawing from the single European currency during the country's recent election campaign, said that Italy's national debt was becoming unsustainable and that its terms had to be renegotiated.

"We are being crushed – not by the euro, but by our own debts. If the interest repayments constitute 100 billion euros ($130 billion) per year, then we're dead. There is no alternative," he told Focus. Any ripples on among banks or investors, Grillo said, would just have to be absorbed like in other areas of trading - likening government bonds to company shares. "If I buy shares in a company that then goes bankrupt, then that's my bad luck. I have taken a risk, and lost out."

The 5-Star Movement, with Grillo describing himself as the party's "spokesman," shot to third place in Italy's national elections at the weekend, winning 25.5 percent of the popular vote in the elections for the lower house of parliament. Owing to Italian electoral laws guaranteeing the largest single party or bloc 54 percent of the seats, that vote tally translated to 108 of 617 seats. The center-left alliance of Pier Luiogi Bersani won the most votes and therefore holds a lower-house majority of 340 seats.

Not prepared for coalition

But Grillo's party's strength, along with that of the second-placed center-right alliance fronted by Silvio Berlusconi, has caused particular complications in the upper house, the Senate, where no Italian group has a clear majority and stable coalitions appear unlikely.

The Genoese ex-comedian said that he remained unwilling to ally with either Bersani or Berlusconi, saying none of the established parties would support the major changes to Italy's political structure that the 5-Star Movement has advocated.

"If they were to suggest immediate changes to electoral law, an abolition of the state covering election campaign expenses and a maximum term of two legislative periods for all parliamentarians, then we would support that kind of government immediately," Grillo said. "But they will never do that. They're just bluffing to try to buy time."

Bersani, meanwhile, said in the Italian press on Thursday that he was not prepared to form a grand coalition in the Senate with Berlusconi – whose alliance is the strongest single Senate entity. The election results differed from house to house owing in part to Italy's electoral law, which states that people must be 25 years old, not 18 as is the case for the lower house, to vote for Senators.

A pair of the outstanding court cases against Berlsuconi continued in Italy on Friday. Speaking outside an appeals trial in Milan, Berlusconi called on his supporters to protest outside the court, accusing the legal system of framing him.

"Some magistrates use justice to fight and eliminate political enemies, which they cannot eliminate through the democratic system of elections," Berlusconi said, speaking outside a case where he was appealing a guilty verdict on charges of tax fraud centered around his Mediaset family media firm.

He claimed that Senator Sergio de Gregorio, who told the court he was paid 3 million euros to switch political affiliation, was forced to lie. The center-right leader claimed that prosecutors "told [de Gregorio]: 'You either tell us something against Berlusconi, or we put you in jail.'"

In another case, Berlusconi was awarded 10,000 euros in damages for breach of privacy after pictures of him frolicking with young women at his Sardinia villa were published in weekly-magazine Oggi with the headline "Berlusconi's harem."