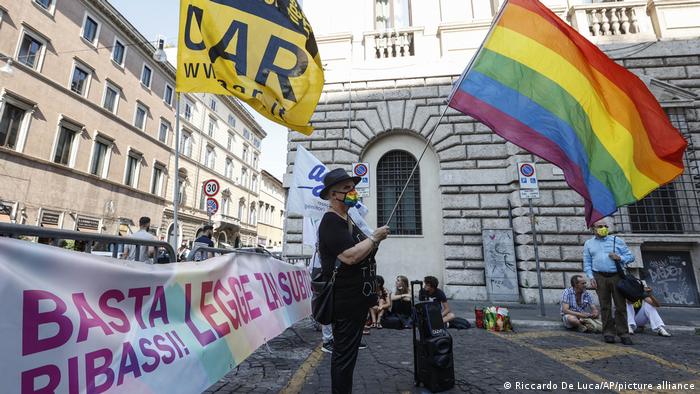 Polling shows that the law had popular support in Italy

The Italian parliament on Wednesday rejected a broad anti-homophobia law.

The law would have made homophobia a crime that is treated similarly to racism, allowing for prison sentences for offenders. It sought to punish acts of discrimination and incitement to violence against gay, lesbian, transgender and disabled people.

In the Senate, the upper chamber of the Italian legislature, 154 lawmakers voted against the bill, while 131 voted in favor.

The right-wing Northern League and the Brothers of Italy parties, as well as the Vatican, were the most vocal opponents to the proposed law.

How did proponents react?

The bill passed the lower chamber, the House of Representatives, in autumn 2020. The two right wing parties opposed to the law forced a vote in the Senate after critics and proponents failed to reach a compromise.

Five Star party leader, former Prime Minister Giuseppe Conte, said it was clear that some members of parliament had not progressed as far as the rest of Italian society.

Foreign Minister Luigi di Maio of the Five Star Movement said it was a "disgrace" that the law failed, and said gay people were still discriminated against in Italy. Social Democrat Labour Minister Andrea Orlando also described the outcome as a "disgrace for the country."

Leader of the Social Democrats Enrico Letta said people who wanted to turn Italy back in time had won this round, "But the country feels otherwise. And that will soon become clear."

Why were people opposed to the law?

Critics of the law said it endangered freedom of expression and could lead to supposed gay propaganda in schools.

The Vatican lodged a rare formal diplomatic complaint against the proposed law in June, alleging that it breached the Concordat, the bilateral treaty between Italy and the Holy See. It said the law may lead to Catholics being prosecuted for expressing opinions in favor of traditional heterosexual family structures.

League leader Matteo Salvini said proponents of the bill had failed to reach support of critics due to their inflexibility on the law's contents.

"They said no to all compromise proposals, including those proposed by the Holy Father (Pope Francis), by associations and by many families," Salvini said.

Parliament is blocked from reopening discussions on the proposed law for the next six months, making it almost impossible to approve it before the legislature expires early in 2023.

LGBTQ rights group Arcigay says it records more than 100 hate crime and discrimination cases each year. But attempts over the past 25 years to punish acts of homophobia and transphobia have failed.

Italy has become the last major Western country to legalize same-sex partnerships as a much-disputed law takes effect. The Catholic Church and several parties have strongly opposed the move.