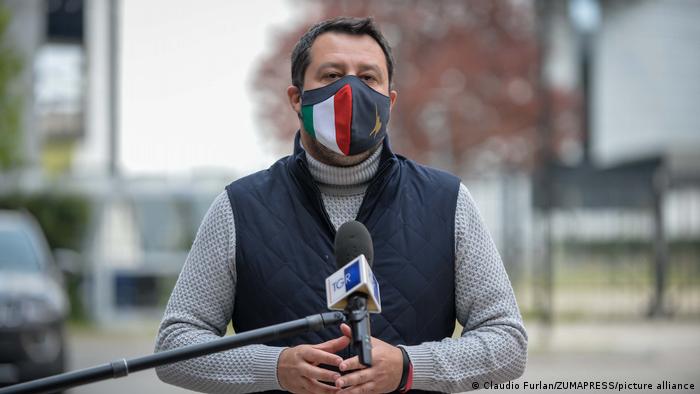 Salvini has maintained he was just putting Italy first

Judge Lorenzo Iannelli set September 15 as the trial date after a hearing in Palermo.

Salvini confirmed the outcome and insisted he was only performing his duty as a proud Italian by refusing entry to the Open Arms rescue ship.

Citing the Italian Constitution, Salvini tweeted that defending the country was the "sacred duty" of every Italian. "I'm going on trial for this, for having defended my country? I'll go with my head held high, also in your name," before concluding, "Italy first. Always."

Palermo prosecutors have accused Salvini of a dereliction of duty and kidnapping, for keeping the migrants at sea off the coast of Lampedusa in August 2019.

During the standoff, some of the migrants threw themselves overboard in desperation.

Eventually, after a 19-day ordeal, the remaining 83 migrants still on board were allowed to disembark in Lampedusa after a court overturned Salvini's ban on private rescue boats entering Italian waters.

Salvini maintained an anti-migration stance during his time as interior minister in the first government of Prime Minister Giuseppe Conte, from 2018 to 2019.

Open Arms welcomed Saturday's ruling. "Salvini on trial accused of kidnapping people and omission," the NGO tweeted. "We are happy for all the people we rescued in that mission and for all the vulnerable people saved so far in the sea of ​​shame."

The Difficult Life of Migrant Workers during the COVID-19 Pandemic

We report from Kenya where families depend on money from abroad and from India, where some migrant workers are learning new skills.

Almost all main parties from across the political spectrum have pledged their support to Draghi. The former banker is now tasked with guiding Italy out of economic devastation brought on by the coronavirus pandemic.

Over 200 migrants have disembarked the humanitarian vessel Open Arms off the coast of Sicily and are undergoing quarantine. About a hundred migrants have died in the Mediterranean Sea this week alone.