Italy hit by race riots after immigrants shot and wounded | Europe | News and current affairs from around the continent | DW | 08.01.2010

Italy hit by race riots after immigrants shot and wounded

African immigrants rioted in Italy after two farm workers were shot at with an air gun. Arrests were made and 32 people were injured in one of the country's worst race riots for years. 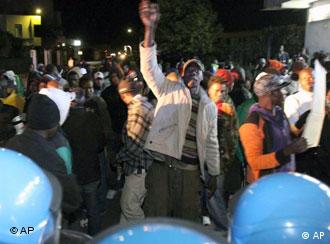 Immigrants in southern Italy clashed with police after they were attacked by white Italian youths with air guns.

Dozens took to the street in the town of Rosarno, Calabria, smashing car windows and setting fire to vehicles and trash cans.

Police said that a car was attacked while passengers were inside and several people were injured. A total of 32 people, including 18 policemen, were injured in the rioting which began on Thursday.

The unrest was sparked when Italian youths fired an air gun at a group of immigrants returning from work on a farm. Two men, one from Nigeria and one from Togo, were wounded.

"Those guys were firing at us as if it were a fairground, they were laughing. I was screaming and there were other cars passing by but nobody stopped, nobody called the police," a Moroccan immigrant named Khamal told La Repubblica newspaper.

The rioters blocked a road and clashed with police who were wearing riot gear. An undisclosed number of arrests was made.

The unrest continued through Friday as store windows were smashed by immigrants. Police said that residents of Rosarno had, in two separate incidents, tried to run down immigrants with their cars.

More than 2,000 immigrants protested with banners in front of the town hall, highlighting what they say is racist treatment at the hands of locals. "We are not animals," some shouted.

Schools and shops were closed due to the tense atmosphere, and there were reports of one white resident firing ammunition into the air.

Immigrants in the town work picking fruit and vegetables, with about 1,500 living in abandoned factories with no running water.

An agreement between Italy and Libya to stem illegal immigration appears to be working. The economic downturn in Europe could also explain the sharp drop in arrivals. (03.08.2009)

Silvio Berlusconi says it is more humane to send migrant boats back to Libya than let them enter Italy because of the unbearable conditions African refugees have to endure, which he compares to those in Nazi death camps. (20.05.2009)

More than 1,000 asylum-seekers and would-be immigrants broke out of an Italian refugee center on the island of Lampedusa on Saturday, Jan 24. Conditions at the center have been criticized by the UN and Germany. (24.01.2009)