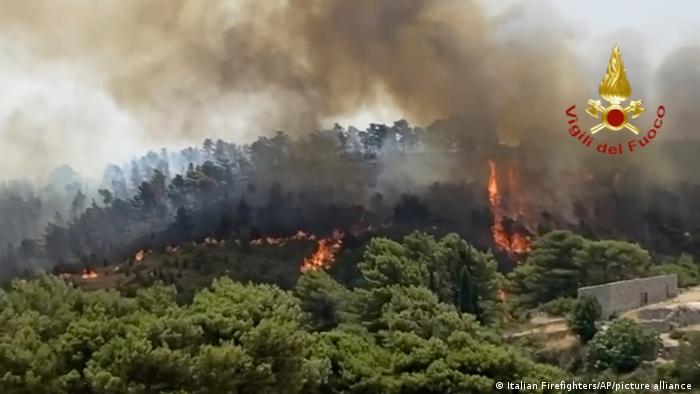 Italian firefighters on Thursday reported hundreds of interventions as fire gripped the southernmost part of the mainland and two largest islands.

Searing heat is expected to continue after temperatures soared to a suspected new European record of 48.8 degrees Celsius (119.8 degrees Fahrenheit).

What regions have been hit?

Of most concern at present is the Calabria region, situated at the toe of the Italian peninsula, amid an anticyclone named Lucifer.

Two elderly men were reported killed on Wednesday in the city of Reggio Calabria, where two deaths were recorded last weeks amid fires.

Civil Defense officials also say the fire danger on the large islands of Sicily and Sardinia remains very high because of persistent drought and winds.

Regional authorities in Sicily have declared a state of emergency, although firefighters say the situation there has eased in the past day.

In the southern province of Catanzaro, officials said they had been fighting flames that engulfed a museum through the night.

A new record for Europe?

A monitoring station in Sicily on Wednesday reported a temperature of 48.8 Celsius (119.84°F), as the anticyclone swept in.

The temperature, recorded at the island's Syracuse station, was reported by Sicily's agriculture-meteorological information service SIAS.

SIAS said on its Facebook page that the temperature was the highest registered in the entire network since its installation in 2002.

The measurement could represent a new European temperature record, although weather experts have cautioned that the measurement must still be confirmed.

Southern Europe has seen a series of extreme heatwaves this summer, with deaths also recorded in Greece and Turkey.

Greek Prime Minister Kyriakos Mitsotakis said Thursday that devastating wildfires there had caused the greatest ecological catastrophe the country has seen in decades.

His comments came as authorities said the situation was much improved, with most large wildfires under control.

Experts say climate change means the intensity and frequency of such extreme weather events is likely to increase.