Some 12 million Italians, 20% of the population, have headed to the polls in municipal elections. The far-right is seeking gains despite being racked by scandals. 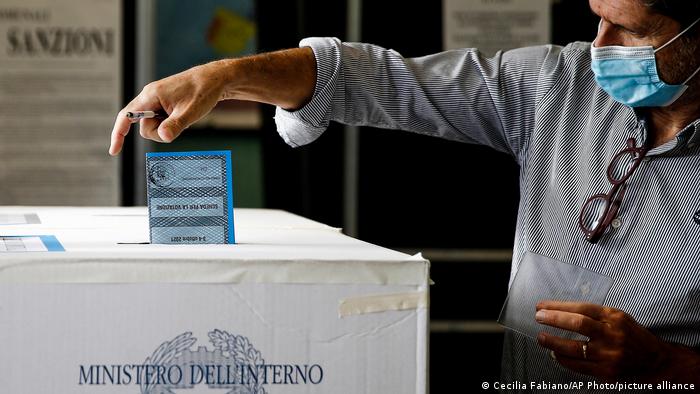 Italians in almost 1,200 municipalities across the country, including the major cities Rome, Milan, Naples, Turin and Bologna, headed to the polls on Sunday for the two-day local elections.

Two far-right parties, Matteo Salvini's Lega (the League) and the Fratelli d'Italia (Brothers of Italy, FdI), have been embroiled in scandals in the run-up to the vote, despite a rise in popularity.

The vote is seen as a poll on Italy's coronavirus policies as well as the competency of Prime Minister Mario Draghi who only took office in February.

The FdI, with its neo-fascist roots, is hoping to gain votes from those opposing hygiene measures. It is also the one party that has not backed the unaffiliated prime minister. Party leader Giorgia Meloni is hoping to pull ahead of the League and become the main far-right party.

Major cities up for grabs

The center-left and center-right candidates are seen as the most likely winners in Rome. The reputation of the current Mayor Virginia Raggi, from the populist 5-Star Movement (5SM), has been damaged by pictures of wild boar nosing through piles of rubbish in the capital's streets.

The center-right candidate, backed by both nationalist parties, is facing off against the candidate from the center-left Democratic Party (PD), former Finance Minister Roberto Gaultieri.

The outcome of the municipal elections could have an impact on the next parliamentary elections in spring 2023.

The surprise victories of several 5SM candidates in the previous municipal elections preceded their huge wins in the subsequent elections that left them the single largest party in parliament.

The far-right parties have been shaken by their recent scandals.

The FdI's leader in the European parliament, Carlo Fidanza, was caught on camera by an investigative journalist from the Italian news site Fanpage making racist, sexist and antisemitic remarks as well as talking about receiving illegal funding.

He stepped down on Friday, two days ahead of the vote.

Salvini's League has also been mired in a scandal revolving around its social media chief who is currently being investigated for drug trafficking. The populist leader has repeatedly ranted against drug use and has claimed that the investigation is a setup by the left.