Italy's economy minister says the new government's first budget will include a basic income for the poor — in line with the ruling parties' campaign pledges. But it's not yet clear how such policies will be financed. 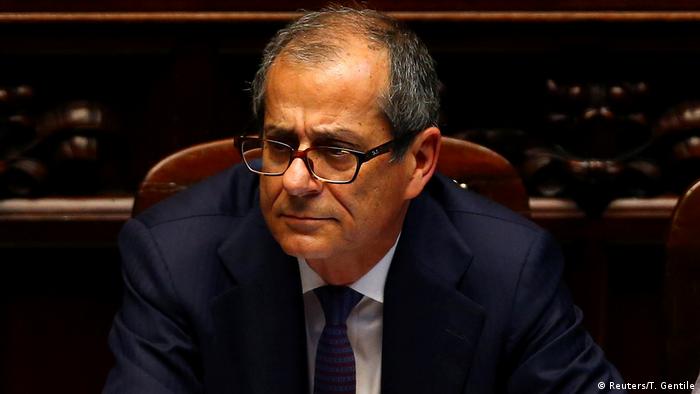 The measures were sought by the anti-establishment 5-Star Movement, which is in the ruling coalition with the right-wing League. The party had threatened not to vote for the budget unless its demands were met.

Tria, who isn't affiliated with either party, is under pressure to come up with a draft budget that funds key campaign pledges made by the ruling parties while upholding Italy's financial commitments to the European Union. The draft is due to be presented Thursday.

'Citizens' income' in the budget

In a speech to a conference in Rome, the economy minister warned there was a need for shrewd policy to allay market concerns and avert a clash with the European Commission.

"We are working on a mix of policies that show everyone they should have confidence in Italy, not only in our public finances but in our economic growth," Tria said. "We have to give a sign to the financial markets, to those who lend us money."

During the election campaign, the 5-Star Movement had promised a basic monthly income of up to €780 ($915) for poor Italians, while the League campaigned on a pledge to introduce a flat tax.

Tria told the event in Rome that a basic income scheme would "help manage the social consequences of the transformation process of production," adding that allowing people to retire earlier would give companies a younger, more skilled workforce. He said the budget would raise public investment, and that tax cuts advocated by the League would begin with corporate tax reductions in 2019 before being extended to individuals in later years.

It was not immediately clear how the ambitious welfare and tax measures would be funded.

The number of Italians living in poverty has tripled over the last decade. The country's struggling economy was one of the reasons so many voters backed non-traditional parties like the League and the 5-Star Movement in this year's March elections.

Italy has experienced the slowest growth out of all the eurozone countries since the monetary union came into being almost 20 years ago. Its public debt, equal to just over 130 percent of GDP, is also the highest in the eurozone after Greece's.

Both of the ruling parties have agreed to keep the budget deficit below the eurozone's threshold set at 3 percent of the GDP. According to government sources cited by news agencies, the deficit target for 2019 would be set at 1.8 or 1.9 percent of the GDP, higher than the 1.6-percent level initially recommended by Tria.

"We will definitely raise the deficit, we cannot be afraid of numbers," Sergio Battelli, chairman of the EU affairs committee of the lower house of parliament, told German news agency dpa. He argued that Italy should be let off by the European Commission, saying that other EU countries had run higher-than-permitted deficits in the past.

The government must submit its detailed budget plans to Brussels by mid-October.