The room containing three beds and one window was excavated in a villa buried by the 79 A.D. volcanic eruption. Officials say it offers "a very rare insight into the daily life of slaves" in the ancient city. 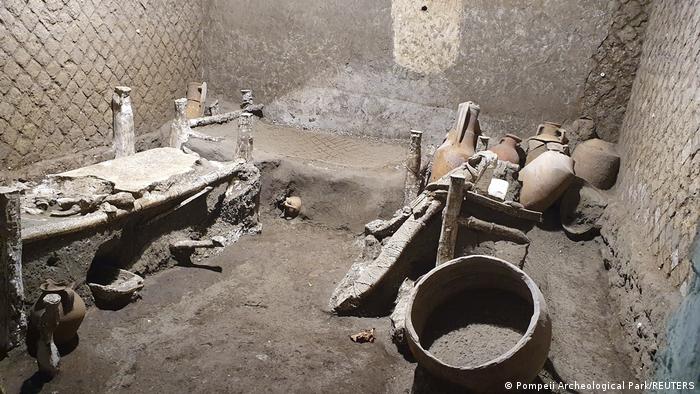 Archaeologists have unearthed the remains of a "slave room" at a Roman villa in Pompeii, officials said Saturday.

They said the rare find in the ancient city, which was buried in ash when Mount Vesuvius erupted in 79 A.D., appeared to be in an excellent state of preservation.

Earlier this year, a perfectly intact ceremonial chariot was also uncovered at the site in southern Italy. Archaeologists believe the room likely housed slaves who were charged with maintaining the chariot.

What was found in the room?

Two beds were about 1.7 meters long (nearly 5 feet, 7 inches) and one just 1.4 meters. The room had only one small window.

In the corners of the room, there were amphorae — a type of container — that seemingly belonged to the master of the house. Officials believe slaves kept their belongings in two amphorae under the beds.

The archaeologists also found a wooden box in the middle of the room and a drawbar leaning against the bed.

Nearby, a wooden chest contained metallic objects and textiles that "appear to be parts of harnesses for horses," according to the Pompeii archeological park.

A 'window' on daily life of enslaved

Officials hailed the discovery as a rare insight into slavery and the daily life of the enslaved.

"This is a window into the precarious reality of people who rarely appear in historical sources, written almost exclusively by men belonging to the elite," said Gabriel Zuchtriegel, Pompeii's director general.

The "unique testimony" into how "the weakest in the ancient society lived ... is certainly one of the most exciting discoveries in my life as an archaeologist," Zuchtriegel said in a press release.

The room was discovered during a dig at a suburban villa. "We did not expect to find such a room. Yet we often walked past it," said Zuchtriegel, who was born in the southwestern German state of Baden-Württemberg.

"This new important discovery enriches our understanding of the everyday life of the ancient Pompeians, especially that class in society about which little is still known," Italian Culture Minister Dario Franceschini said.

Pompeii, which was rediscovered in the 18th century, is one of the most popular tourist attractions in Italy and repeatedly uncovers sensational finds.

The Fall of Pompeii reimagined in Paris' Grand Palais

Pompeii, the Roman city buried in volcanic ash 2,000 years ago, retains its universal allure. At a new Paris exhibition, visitors can experience the city up close thanks to the latest 3D technology.