An investigation into far-right extremist groups in Italy led to the police finding an air-to-air missile, machine guns and rocket launchers. The huge weapons haul was almost without precedent, authorities said. 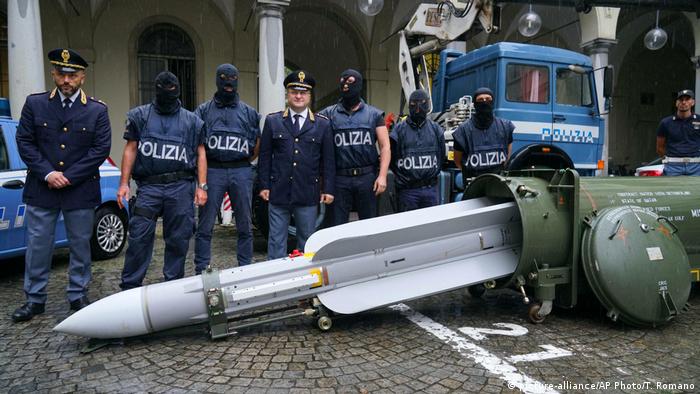 Among those arrested on Monday was a former candidate for the neo-fascist Forza Nuova party. His home was found to have the missile and weapons including a Scorpion machine gun, 306 firearm parts, 20 bayonets and more than 800 bullets of various calibers. The arms were primarily from Austria, Germany and the United States. Neo-Nazi propaganda was also found at the house, police said.

"During the operation, an air-to-air missile in perfect working order and used by the Qatari army was seized," police said of the 245-kilogram (540-pound) Mantra Super 530 F missile. They also found "latest generation" automatic assault rifles.

A 42-year-old Swiss national and a 51-year-old Italian were also arrested as part of a police probe into Italian extremists known to have joined fighters in the conflict in Ukraine's Donbass region.

Police ruled out a terrorist action, with counter-terrorism official Eugenio Spina saying "For now, nothing leads us to suspect" an active plot to use the weapons.

It appears more likely the three were involved in marketing the weapons. The Digos law enforcement agency deals largely with terrorism and organized crime. It led the operation from Turin with assistance from police in Forli, Milan, Novara and Varese.

Carlo Ambra, the chief of the Turin unit of Digos, said investigators had intercepted phone conversations: "The most important thing for now is that we managed to block the sale of these arms."

The extreme-right Forza Nuova party in a statement released Monday distanced itself from the key suspect, and its former candidate.

Far-right Interior Minister Matteo Salvini did not comment on the raids.

"The far right in this country traffics weapons of war, and even missiles. It's an incredible, very serious event," said former PD head Maurizio Martina.

In recent weeks, police have carried out several raids on far-right targets around Turin, arresting another suspect accused of advocating fascism and possessing illegal weapons.

More and more Reichsbürger and neo-Nazis are getting legal access to firearms at shooting clubs, according to Thuringia's state intelligence agency. The state is thought to be home to about 1,000 Reichsbürger. (04.10.2017)