The once-dominant Israeli Labor Party has struggled in recent years to stay relevant. But, following the election of lawmaker Merav Michaeli as its new leader, the party could be heading for a revival. 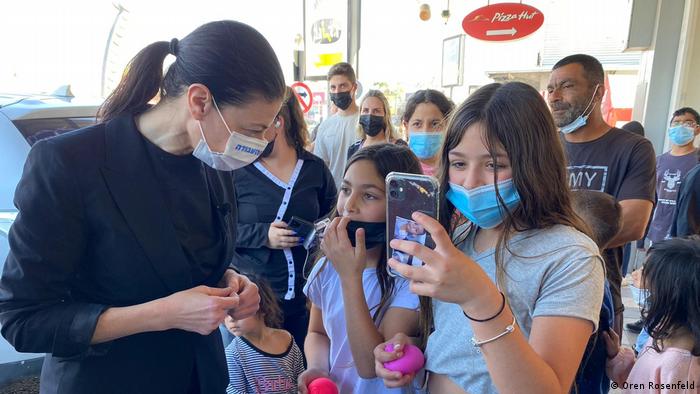 After three long lockdowns, a shopping center near the town of Rehovot is once again bustling with people. Making her way through the crowd, the new leader of the Israeli Labor Party, Merav Michaeli, stops every few minutes for a brief chat or a selfie. Though Israel's rapid vaccination campaign has allowed the country to reopen, it is still unusual to see a politician mingling with crowds during this election campaign. Israelis will be voting for a new parliament for the fourth time in two years on March 23, but the majority of events have been held online.

The Israeli Labor Party is pinning its hopes on the 54-year-old Michaeli. The social-democratic HaAvoda — the party's Hebrew name­­ — used to be the major ruling party in Israel. But, in recent years, it has struggled to avoid complete political oblivion. In the past three elections, the party earned just six to seven seats in Israel's Knesset, the 120-seat parliament, and at times barely cleared the electoral threshold. That's far cry from its heyday in 1992, when it secured 44 seats under Prime Minister Yitzhak Rabin.

"Everybody was so sure that the [Labor Party] was dead. That it's not possible to revive it. And I knew that it wasn't true," Michaeli told DW while on the campaign trail at a kibbutz. "Labor has a role to bring back the Zionist dream, a home for the Jewish people with equality for all, with a just society and with security that stems from striving for peace. Israel needs a strong ruling party on the center-left. That is what I insist on rebuilding now."

As Michaeli makes her way through the throngs of people, there are cries of "rag Bibi" — which means "only Bibi". It's the signature slogan of diehard supporters of Benjamin "Bibi" Netanyahu, Israel's long-term prime minister.

Michaeli keeps smiling under her face mask, even as a group of Likud supporters try to drag her into a discussion about the former Likud prime ministers Menachem Begin and Yitzhak Shamir. She has a clear message for them. "Netanyahu has been in power for 12 years in a row. Removing him is a mandatory requirement," Michaeli said. "Only after Netanyahu is removed can we start rebuilding our democracy, our politics, our public sphere – without the unbelievable hold that he has had after having been in power for so long." 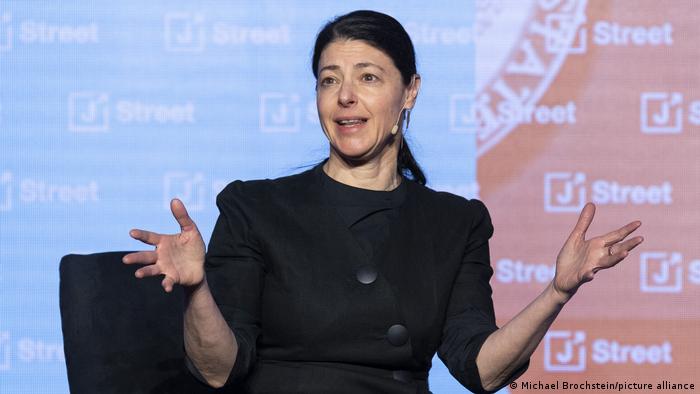 With her signature all-black look, Merav Michaeli is an established figure in Israeli politics

Having won the party's primaries in January, Michaeli is under pressure to rebuild the party in time for the upcoming election.

"She is the party's 10th leader in 20 years, and that's not counting those who have filled the post twice. Welcome to the worst job in Israeli politics," Anshel Pfeffer wrote in the daily Ha'aretz newspaper after the primary vote.

Michaeli, a journalist-turned-politician, is a well-known figure in Israel. Known for her signature all-black look, she served as a member of Knesset for Labor since 2013 and is seen as a progressive politician who supports women's and LGTBQ+ rights. She also favors a two-state solution with the Palestinians, and often cites the late Rabin's "security and peace" approach.

In the early 1990s, Labor led what was known as the leftist "peace camp" and eventually negotiated the Oslo peace accord, signed by Rabin and Palestinian leader Yasser Arafat in 1994. Rabin was murdered shortly after, in 1995, by a Jewish right-wing extremist. The delayed prospect of peace led to the second Palestinian Intifada uprising in 2000.

"After the collapse of the peace process with the Palestinians in 2000, Labor somehow lost its way", said Maoz Rosenthal, senior lecturer at the Interdisciplinary Center of Herzliya (IDC). "Other parts of the Israeli political system were able to give answers to policy questions that were clearer or more attractive." The peace camp was largely marginalized, and at least half of the Israeli electorate now embraces right-wing policies and the continued military occupation of Palestinian territories.

Michaeli attributes the decline of the party to years of "incitement and delegitimization" of the Israeli left by Netanyahu and the right-wing bloc. "I think we really hit rock bottom," Michaeli said when asked about the party's recent history. But she also harshly criticized Labor's previous leadership for breaking an electoral pledge and joining the last Netanyahu-led government as ministers.

Home for the center-left

Michaeli emphasizes the center-left character of the Israeli Labor Party, which has been given new momentum by her leadership. Polls project that Labor could reach seven seats after the March 23 election, and show that Michaeli enjoys particular support among female voters.

"I think she has a proven track record of what she stands for since her time as lawmaker. And I like her feminist approach to politics," said a young woman who previously voted for the left-wing Meretz party.

For retiree Tamar Levi, a longtime supporter of Labor, Michaeli is the right leader to heal the rifts in society. "She is the only woman leading a party, and that in itself is great," she said. 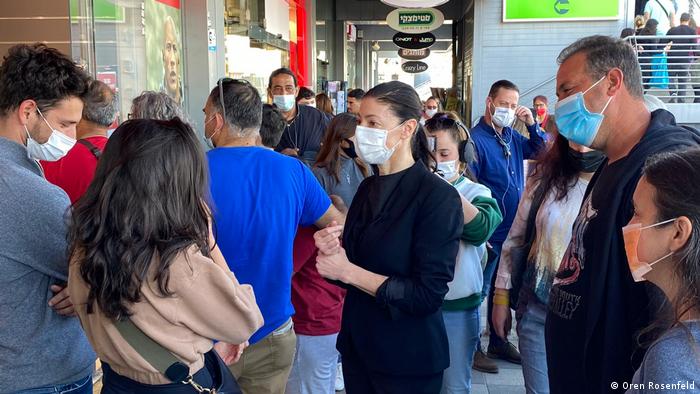 Merav Michaeli on the campaign trail

In the short-term, Michaeli said she was open to joining a coalition government — but without Netanyahu. "There is no coalition for change and for replacing Netanyahu without Labor. Labor is an essential part of such a coalition," Michaeli said.

But this may prove difficult given the diverging policy positions between different parties eyeing a coalition without Netanyahu.  That is a problem that will only add to Michaeli's longer-term challenge of restoring Labor as a major party in Israel.