Israeli Defense Minister Avigdor Lieberman has resigned due to differences with Prime Minister Benjamin Netanyahu over a Gaza ceasefire. The move may trigger early elections. 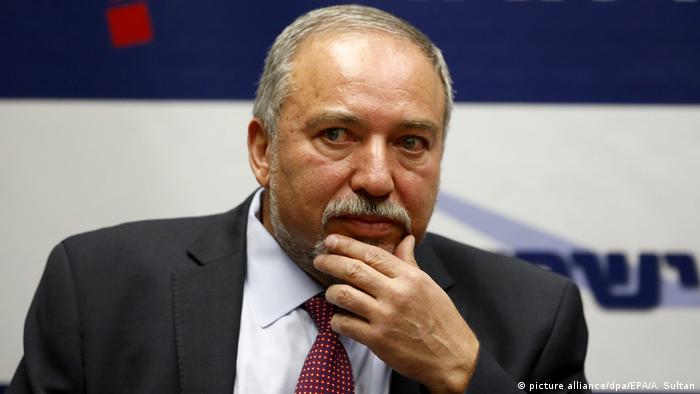 Israel's hard-line defense minister Avigdor Lieberman announced his resignation on Wednesday and called for snap elections after a row over a ceasefire with Gaza's rulers Hamas to end a two-day flare up in violence.

"What happened yesterday — the truce combined with the process with Hamas — is capitulating to terror. It has no other meaning," Lieberman told journalists. "What we're doing now as a state is buying short-term quiet, with the price being severe long-term damage to national security."

A security cabinet meeting on Tuesday ended with a statement from Prime Minister Benjamin Netanyahu's office saying that ministers had unanimously agreed to the Egyptian-brokered ceasefire.

Lieberman's office then made a statement saying that his "alleged support for stopping the attacks in Gaza is fake news."

Four other ministers, including Education Minister Naftali Bennett of the far-right Jewish Home Party, also announced they had opposed the ceasefire.

Netanyahu has defended the truce.

"I see the big picture of Israeli security that I cannot share with the public," he said at a memorial ceremony. "Our enemies begged for a cease-fire and they know well why. I cannot detail our plans for the future. We will dictate the time and circumstances that are right for Israel and are right for the security of our people."

Hamas described Lieberman's resignation as a "political victory for Gaza."

Pulls out of coalition

Lieberman also said his Yisrael Beiteinu party would leave the ruling coalition, an action that could prompt Netanyahu to call early elections. The departure of Yisrael Beiteinu's five seats in parliament leaves Netanyahu with a majority of just one seat in the 120-seat Knesset.

There has been recent speculation Netanyahu is planning to hold early elections, now slated for November 2019.

However, an official from his Likud party dismissed speculation there would be early elections.

Netanyahu, who is also foreign minister, will take over the defense portfolio, but he may come under pressure from other coalition partners for that prized ministry.

Netanyahu has come under criticism from members of his right-wing government for his decision to allow Qatar to provide money to the Hamas-run Gaza Strip to pay for salaries and fuel to ease an electricity crisis.

Last week, Qatar delivered $15 million (€13.2 million) of cash in suitcases to the Gaza Strip. The payment was part of $90 million that Qatar has pledged to deliver to the Gaza Strip in the next six months.

The Israeli defense minister said a crippling strike against the Gaza-ruling Islamist group is the only way to reduce violence. With a growing army presence near the Israeli-Gaza border, that option is becoming likely. (16.10.2018)