Israeli army releases photo of a soldier praised as ′The Terminator′ | Middle East | News and analysis of events in the Arab world | DW | 07.11.2015

Israeli army releases photo of a soldier praised as 'The Terminator' 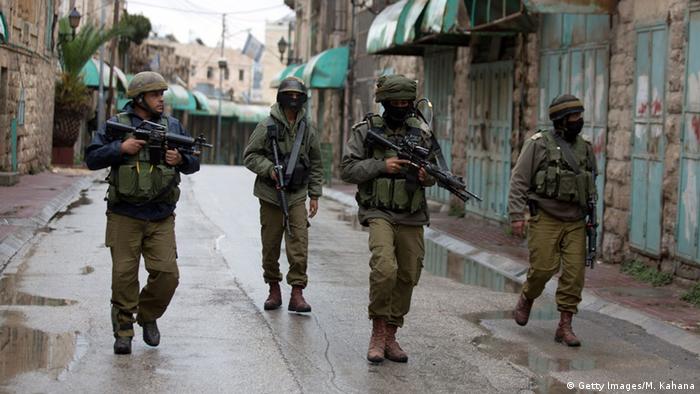 The photo of the soldier has been widely disseminated on Palestinian news websites and social media as well, stirring a massive debate over the glorification of such deeds. The article states that the soldier shot and killed a Palestinian who attempted to stab a fellow soldier near Bethlehem on Thursday, as well as two other Palestinians who moderately wounded another soldier nine days prior to that.

The profile article about him, which has been the top story on the IDF's official website for nearly two days, reveals the face of the 19-year-old soldier - a very unusual practice for the Israeli military, which imposes strict rules regarding the identity of its soldiers, the weapons they use and the general weapon arsenal the army possesses.

Many Israeli media outlets have lauded the soldier, specifically mentioning his young age and relative lack of experience while describing his "courage and bravery."

Israel's most popular news website, Ynet, has reported that "Corporal T" "began his service in March 2015, and already won praise from his officers for his coolheaded and speedy response."

A report about him on the American news website "The Jewish Press" was titled "Meet the Terminator," referring to the cyborg played by Arnold Schwarzenegger in the Hollywood film franchise. The soldier was described as a hero, and the article stressed that his young age "did not affect his focused and precise actions in both cases."

However, many were quite shocked by the apparent admiration for his actions, claiming that the killings of the Palestinians were at best a necessary evil - if at all - but most certainly not a source of pride.

Palestinian news agency Ma'an has noted that "the celebration of the 19-year-old soldier's actions comes after a deadly month in the occupied Palestinian territory that left at least 69 Palestinians dead." 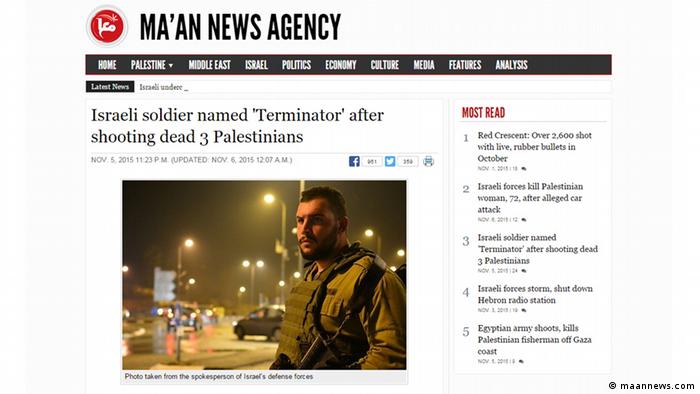 "As we guarded the junction, we noticed the suspect, told him to cross the road to us and when he reached us he pulled out a knife with the intention of stabbing the friend who was with me," the soldier said in an interview with Israeli media.

"At that moment I cocked my weapon and shot him. During another stabbing attempt a week ago, I shot two terrorists in order to remove the threat."

The highly popular Facebook page Shehab News Agency, with over 4.5 million followers, has also posted the photo, generating many comments calling for revenge.

The decision itself to publish his uncensored photograph has raised questions about the true motive of the Israeli military.

"This whole decision is very strange," L., a combat soldier who serves in the same brigade as "Corporal T" told DW. "Leave politics aside for a second, we are always instructed not to reveal our names, not to take pictures, and not to pass information using social media. So it's pretty odd that the army decided to publish his picture, and in my opinion also dangerous." 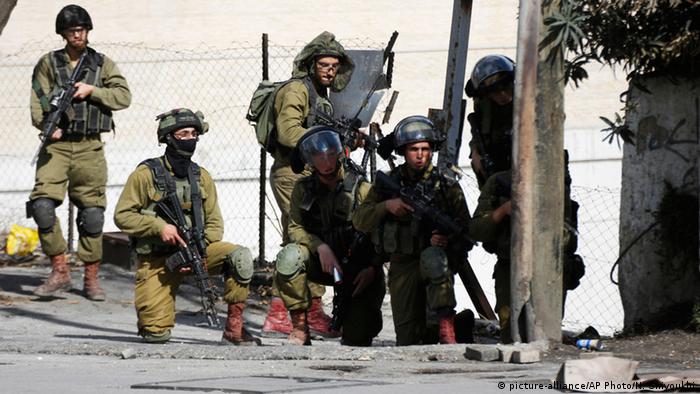 Analysts claim that the actual reason for revealing a soldier's face is related to how badly the soldier's unit needs PR among the Israeli public.

The Kfir (Lion Cub) Brigade, formerly called the 900 Brigade, is the youngest infantry brigade of the IDF, established in late 2005, and suffers from a bad reputation among IDF soldiers for being a relatively "boring" unit to serve in, with very little prestige for highly demanding, unappreciated service.

"I think this is why they chose to do this flattering article," L. explained. "They want prospective soldiers to be enthusiastic about being drafted to Kfir, because the elite units have high morale anyways, and someone has to do the monotonic, routine job too."

One peculiar aspect which has left Israelis puzzled is that the soldier remained unnamed, despite the wide distribution of his photo.

Since his full identity could now be easily uncovered, many are afraid that the army wanted to glorify the "ordinary" soldier without fully considering the consequences, such as the hundreds of Facebook commenters calling to slash his throat.

And indeed, former incidents in which Palestinians were killed by Israeli soldiers did not receive such personal media coverage - on the contrary. Even in the rare cases that a profile article is issued about one particular soldier, it is almost always anonymous.

"Really, what I think about the conflict in general doesn't matter, but in this specific case - whether you agree with the IDF's actions or not - the army was very irresponsible," L. said.

"This is basically sacrificing an individual soldier for some allegedly greater cause - which is actually political - to enhance the Brigade's reputation."

L. added that "even if you're totally against Israel's policy in the West Bank, and even if you think that soldiers are murderers, you have to admit: it's Kosher but it stinks," meaning in Hebrew, it's not illegal but it's still very wrong.

Israel's minister of education: "We're surrounded by the craziest people in the world"

On DW's "Conflict Zone," Bennett explained why in his opinion "there's no place better on earth for Arabs than in Israel." But he said he would defend himself "when hundreds of Muslims are out to kill me and my family." (04.11.2015)

A Palestinian wounded an American citizen in Jerusalem, as clashes broke out in several cities across the Holy Land. In a separate incident, two attackers were shot after charging Israeli troops outside Nablus. (30.10.2015)

As the Israeli-Palestinian conflict simmers, and political rhetoric exacerbates tensions rather than calms them, a different voice is gathering pace online. It isn't mainstream, and it's largely led by women. (22.10.2015)

Sudan: 'The world has a right to be worried'