Israel will destroy Hamas Gaza tunnels with or without ceasefire

Prime Minister Benjamin Netanyahu has said the Israeli army will continue its work to destroy Hamas tunnels under the Gaza-Israel border, regardless of a ceasefire. The Israeli army has also called up more reservists. 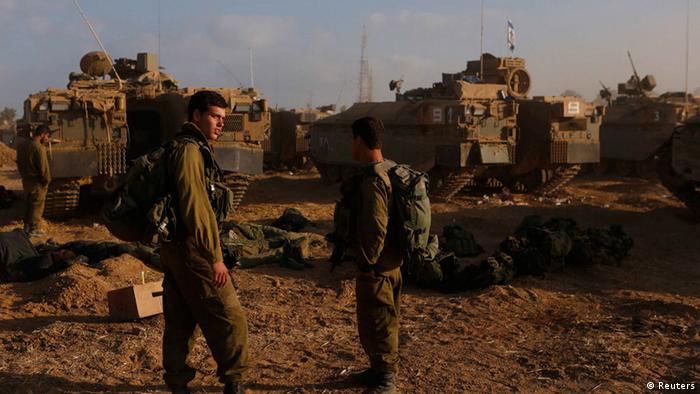 Prime Minister Benjamin Netanyahu said Thursday he will not accept any proposal that prevents Israeli soldiers from completing the job of destroying tunnels dug by Hamas militants throughout Gaza into Israel.

"So far, we have neutralized dozens of terror tunnels," Netanyahu said at the start of a special cabinet meeting in Tel Aviv, "We are determined to complete this mission with or without a ceasefire."

Chief of Israeli forces in Gaza, Major General Sami Turgeman, said on Wednesday that the army were "but a few days away from destroying all the attack tunnels."

Meanwhile on Thursday a spokesperson for the Israel Defense Forces (IDF) said that the military had called up more reservists in order to give a break to some of those already involved in operations in the Palestinian territory.

"The army has issued 16,000 additional mobilization orders to allow troops on the ground to rest, which takes the total number of reservists to 86,000," the spokeswoman told the AFP news agency.

Israel launched what began strictly as an air campaign on July 8 to stop rocket fire from Gaza toward Israel. It expanded the operation with a ground offensive on July 17 with the primary aim of destroying the tunnels.

Officials in Gaza have said that more than 1,300 Palestinians have been killed since the offensive began. Fifty-six Israeli soldiers, two civilians and one Thai national have also been killed.

Dozens killed across Gaza as Israel agrees to short ceasefire

Dozens of Palestinians have been killed in Israeli airstrikes across the Gaza Strip including a strike on a UN school. The Israeli army has agreed to a four-hour humanitarian ceasefire. (30.07.2014)