Israeli PM Benjamin Netanyahu has said he will build the first new West Bank settlement in over 20 years. Meanwhile, the Trump administration in the US pushed back against further settlements. 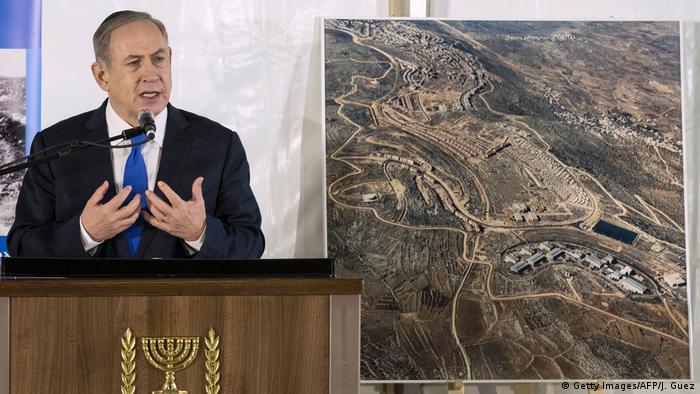 Netanyahu said on Thursday that his administration would see to it that a new settlement be built in the West Bank, a response to a controversial decision by the country's top court to remove an illegal settler outpost.

The Israeli prime minister made the announcement at the site of the Ariel settlement in the West Bank, where he called the forcible removal of occupants from the Amona settlement a "great pain."

"We all understand the depth of the pain and therefore we will establish a new settlement on state land," Netanyahu said. "Already yesterday I formed a team that will determine the settlement location and get everything ready. And we will act so that it happens as soon as possible."

Israel hasn't built a new settlement since 1992, according to anti-settlement watchdog Peace Now.

The prime minister's comments came as the country's security forces began evacuating Amona, which quickly descended into chaos as protestors set fire to tires and poured oil in the streets in an effort to prevent the settlers' removal.

Netanyahu has become more vocal about his desire to expand settlement reconstruction in the wake of US President Donald Trump's election. But the same day the Israeli prime minister made his announcement, the White House issued a statement that appeared to break from Trump's previous stance on the settlement issue.

"While we don't believe the existence of settlements is an impediment to peace, the construction of new settlements or the expansion of existing settlements beyond their current borders may not be helpful," White House spokesperson Sean Spicer said.

Israel has announced several new plans to build homes for settlers since Trump took office two weeks ago. Critics say the building of settlements endangers the two-state solution, which would see an Israeli and a Palestinian state coexisting side by side.

Most of the international community views the settlements as illegal. Netanyahu's administration has frequently butted heads with its own judiciary as well, with the country's highest court pushing back against many of the outposts in the West Bank.