Israeli nationalists are marching through East Jerusalem's Old City in a flag-waving procession. Palestinian factions, meanwhile, have called for a "Day of Rage" against the march. 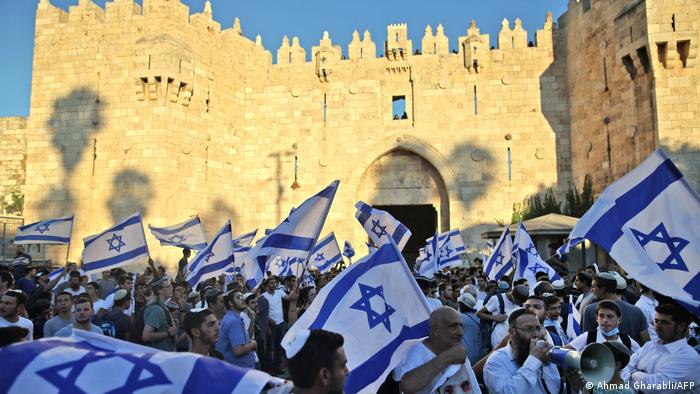 Israeli ultranationalist groups on Tuesday marched into annexed East Jerusalem's Old City, one of the most disputed areas in the Israeli-Palestinian conflict.

The so-called "March of the Flags" passed through the Old City, home to sites sacred to Judaism, Islam and Christianity in the afternoon, including by the Damascus Gate.

Thousands of Israeli police officers were deployed to protect the protesters. Police cleared the grounds in front of the Damascus Gate, shut down roads, ordered shops to close and sent away Palestinian protesters from the area. 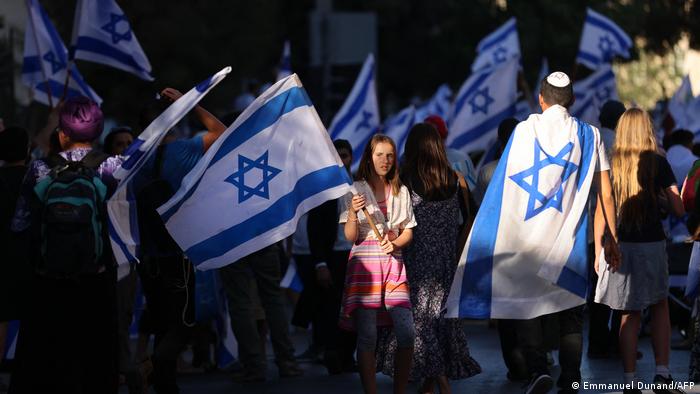 Palestinians said six were arrested and five were injured in clashes with police. Medics said 33 Palestinians were wounded.

Ultranationalist lawmakers Itamar Ben-Gvir and Bezalel Smotrich attended the march, and were hoisted on demonstrators’ shoulders.

At one point, several dozen youths chanted "death to Arabs" and "may your village burn."

Yair Lapid, the architect of the new government, said on Twitter that he believed the march had to be permitted by law, but added: "it’s inconceivable how you can hold an Israeli flag and shout, 'death to Arabs' at the same time…these people are a disgrace to the nation of Israel."

Mansour Abbas, whose Raam party is the first Arab faction to join an Israeli coalition, said the march was "an attempt to set the region on fire for political aims" and undermine the new government.

The Israeli government said organizers of the march consulted police on the best route to avoid tensions with Arab residents.

Rallies by far-right Jewish groups in Arab neighborhoods have escalated tensions in recent months, prompting a police intervention at the Al-Aqsa mosque compound that resulted in the bloodiest flare-up of Israeli-Palestinian violence since 2014. 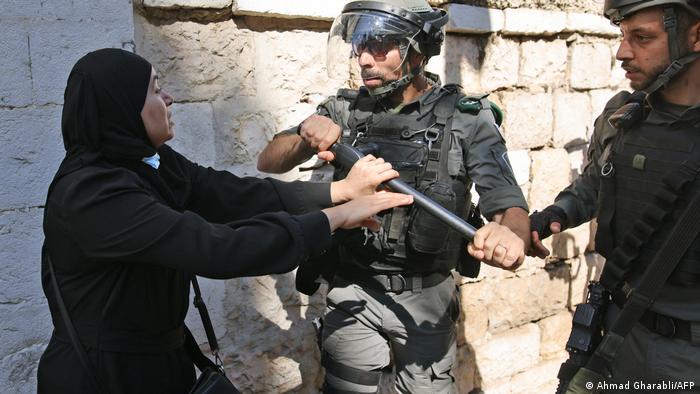 Some Palestinians protested the march, including this woman outside the Damascus gate

But Palestinian Prime Minister Mohammad Shtayyeh warned ahead of the march that the flag-waving procession risks renewing anger.

"We warn of the dangerous repercussions that may result from the occupying power's intention to allow extremist Israeli settlers to carry out the Flag March in occupied Jerusalem," Shtayyeh said on Twitter.

Palestinian factions in the occupied West Bank called for a "Day of Rage" in response.

The march was originally scheduled for May 10 as part of "Jerusalem Day," which commemorates Israel's seizure of East Jerusalem in the 1967 Middle East war.

The march, however, was delayed and rerouted due to Israeli police opposition and warnings from Gaza's Islamist militant group Hamas.

Israeli nationalists originally wanted to march from the Old City's Damascus Gate and into the Muslim Quarter, potential flashpoint areas.

They accused the Netanyahu government of caving in to Hamas.