The prime minister could now have to take his Likud party into opposition for the first time in 12 years. 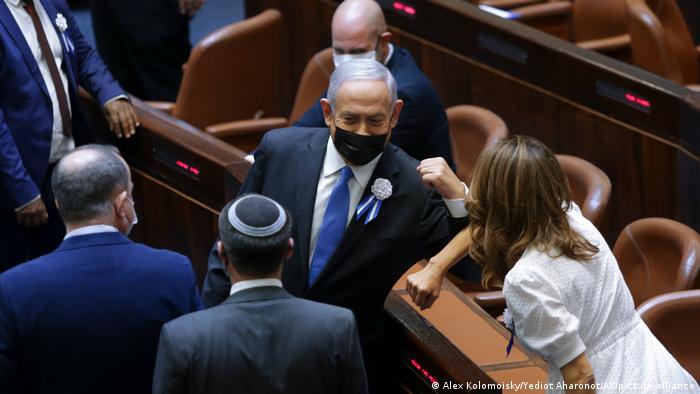 President Reuven Riviln can now give the task of forming a government to another member of Israel's parliament in the coming days, since the deadline has passed. This could result in Netanyahu's Likud Party being put in the opposition for the first time in 12 years.

"Shortly before midnight, Netanyahu informed Beit HaNasi (President Rivin's office) that he was unable to form a government and so returned the mandate to the president," a statement from Rivlin said.

Who else could be tasked to form a ruling coalition?

Rivlin may now decide to give Yair Lapid, the leader of the centrist Yesh Atid Party, the chance to form a government. Lapid, a former news anchor, is a staunch critic of Netanyahu.

Defense Minister Benny Gantz, a member of the Blue and White Party, called on members of parliament to line up behind a coalition under Lapid.

Naftali Bennett, a former Netanyahu ally who serves as the leader of the small right-wing Yamina Party, may also be asked by Rivlin to form a government.

The Likud Party blamed Bennett over Netanyahu's failure to form a government.

Israel has been in political limbo, with voters heading to the ballot box four times over the last two years as leaders struggle to form a stable governing coalition. The most recent elections were held in March.

If no other parliament member is able to form a government, elections will be held for a fifth time.

What does this mean for Netanyahu?

Netanyahu, 71, has served as Israel's Prime Minister since 2009. He is the longest-serving prime minister in Israeli history. He also held office from 1996 to 1999.

Netanyahu served in the Israeli military, seeing active combat during the War of Attrition and the 1973 Yom Kippur war. He also spent part of his life in the US, where he studied architecture at the prestigious Massachusetts Institute of Technology (MIT).

Netanyahu is a hawk towards Iran, and has frequently criticized Tehran for its nuclear aspirations. He has also rejected the idea of a separate state for the Palestinian people.

Netanyahu is currently on trial for charges of taking bribes, breach of trust and fraud. He denies any wrongdoing, but the charges have made it more difficult for him to form a government.