The historic endorsement would put Benny Gantz's Blue and White party ahead of Benjamin Netanyahu's right-wing bloc. President Reuven Rivlin has urged Netanyahu and Gantz to unite in a coalition, but Gantz has said no. 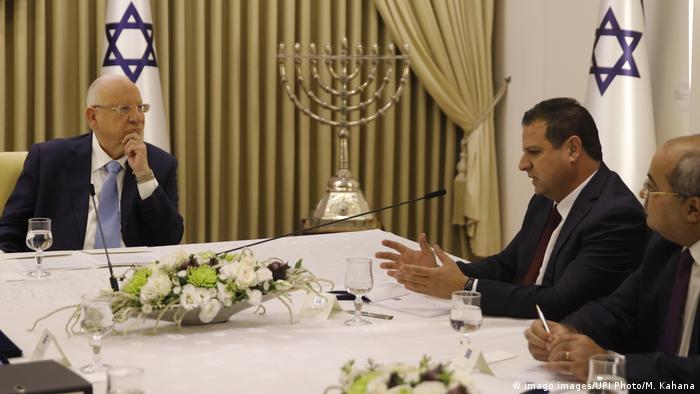 Israel's Arab bloc, the Joint List party, has announced its endorsement of Benny Gantz's center-left Blue and White party. The move comes in the wake of elections where Gantz eked out a win over Prime Minister Benyamin Netanyahu with 33 seats to 31.

But neither candidate managed to reach the number of seats required for a governing majority. The ball is now in President Reuven Rivlin's court, as he is tasked with selecting the politician with the best chance of forming a stable coalition government.

Rivlin has hinted that Gantz and Netanyahu's parties should unite and govern, but Gantz has so far rejected the idea.

By supporting the Blue and White leader, the Arab bloc broke with its own precedent of withholding support for either of the top Israeli candidates.

"We want to bring an end to the era of Netanyahu, so we recommend that Benny Gantz be the one to form the next government," party head Ayman Odeh said Sunday.

Odeh's party saw its turnout swell in last week's election. With 13 seats, the Joint is now the third largest grouping in the parliament.

"If the center-left parties of Israel believe that Arab Palestinian citizens have a place in this country, they must accept that we have a place in its politics," Odeh wrote in an op-ed for The New York Times on the subject.

"There is no shared future without the full and equal participation of Arab Palestinian citizens," he said.

The Joint List's endorsement does not guarantee that the Arab bloc will make it to the governing coalition, but it does push Gantz's center-left bloc ahead of Netanyahu's right-wing block with 57 seats to 55.

No party drawn from the 21% Arab minority has ever formed part of an Israeli government.

Netanyahu blasted the Arab party's support for Gantz. The prime minister said Israelis now were faced with two choices: "a minority government that leans on those that reject Israel as a Jewish, democratic state," or a "broad national government" composed of his and Gantz's parties.

When Rivlin makes his choice, that candidate will have up to six weeks to form a governing coalition.

The Icelandic sadomasochistic band Hatari had displayed scarves with Palestinian flags at the contest in Israel. Eurovision rules prohibit political messages during the competition. (22.09.2019)