Exit polls show Netanyahu's Likud and the centrist Blue and White in a tie. Neither party has enough seats with their allies to form a majority, raising the prospect of tough negotiations for a unity government.

Exit polls from Israel's three major television stations showed the centrist Blue and White party of ex-military chief Benny Gantz is projected to win 32 to 34 seats, while Netanyahu's right-wing Likud party is on pace for between 30 and 33 seats. Another projection estimated both parties would receive 32 seats each.

Either way, the results indicate that Netanyahu or Gantz will face tough and protracted negotiations to cobble together a government.

The initial results showed that neither Blue and White nor Likud would be able to form a 61-seat majority in the 120 member Knesset with the support of their allies.

Likud and its religious and nationalist allies with which it hoped to form a majority only have 55 seats, less than in April's election, according to the average of the three exit polls. Blue and White could enlist the support of 59 for a center-left government.

The results put ex-Defense Minister Avigdor Lieberman in a kingmaker role. His secular, hardline Yisrael Beitenu that receives most of its support from Russian-speakers was on pace to win 9 seats, nearly double its performance in April's election.

Lieberman, a former Netanyahu protege, refused to join a Likud-led government following April's election because of what he described as excessive influence from ultra-Orthodox religious parties. His move forced Netanyahu to call new elections to avoid giving other parties a chance to form a government.

Late Tuesday, the Moldovan-born Lieberman reiterated that he sought a broad unity government with Likud and Blue and White.

"There is only one option for us," he said, adding the unity government should exclude the country's ultra-Orthodox religious parties. 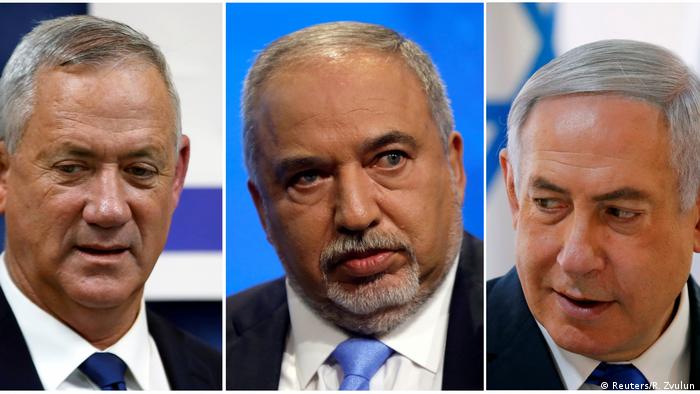 A potential complication is that Gantz has ruled out forming a government with a Netanyahu-led Likud at a time when the prime minister is expected to be indicted on corruption charges in the coming weeks. Lawmakers in Gantz's party have said they are open to a unity government with Likud, but not under Netanyahu's leadership.

"We will act to form a broad unity government that will express the will of the people," Gantz said at a post-election rally, though he cautioned supporters to wait for final results.

Lieberman is unlikely to want to sit in a government with left-wing Arab parties or the ultra-Orthodox religious parties. Blue and White is also unlikely to ask Arab parties to join a coalition.

Netanyahu in a late-night address to party supporters said that he wanted to assemble a "strong Zionist government and to prevent a dangerous anti-Zionist government" with any Arab parties.

Continuing a campaign theme against Israel's 20% Arab minority that critics have called racist, he claimed that Arab parties "negate the existence of Israel as a Jewish and democratic state" and "glorify bloodthirsty murderers."

The Joint List, an alliance of Arab parties, came in third with 14 seats, according to exit polls. They have suggested they could potentially block Netanyahu from becoming prime minister by recommending Gantz.

In other results, the ultra-Orthodox Shas and United Torah Judaism were expected to win nine and eight seats, respectively; the right-wing Yamina party seven; the Labor Party six; and Democratic Union five seats. The ultranationalist Jewish Power faction, widely viewed as a supremacist group, failed to overcome the threshold to enter parliament.

Over the next days, the focus will shift to President Reuven Rivlin, who is responsible for choosing the candidate he believes has the best chance to form a government. That is usually, but not always, the leader of the largest party.

Israel's prime minister said he plans to annex the Jordan Valley in the occupied West Bank if he wins next week's election. The EU, Palestinian and Arab officials condemned the plan as blow to peace. (10.09.2019)

An anti-asylum seeker activist had spray-painted slogans such as "German money kills Jews" and "EU get out" on the walls of the mission's lobby. The EU's top diplomat in Israel has said his staff would "not be deterred." (16.09.2019)

Israel's general election has put Prime Minister Netanyahu on track for a record fifth term in office, but not everybody is celebrating. The vote reflects a deep societal divide. Dana Regev reports from Haifa. (10.04.2019)