Social media has elevated the Gaza conflict into a minute-by-minute tickertape of dead children, destruction and misinformation. Both sides are engaged. Yet Israeli tweets might also help Hamas aim its rockets. 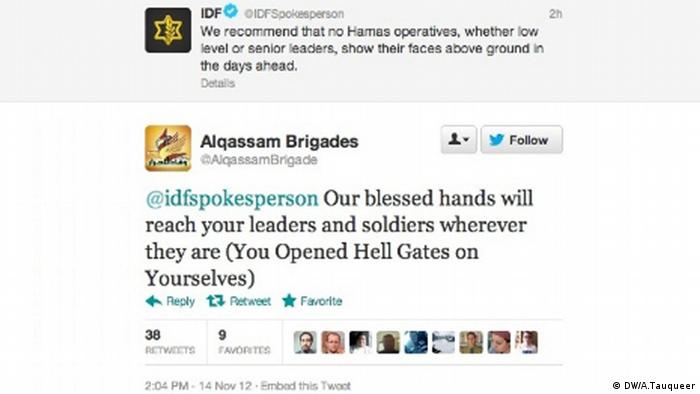 When Ebaa Rezeq sits down in her room to tweet, she first opens up the window. Wryly, she explains her reasoning. If a rocket hits somewhere near her house or a bomb explodes, she explains, then she won't be cut by shards of glass.

Even with the windows closed, the gunshots are unmistakeable. "We're living in hell here and I want the world to experience some of it," she said.

The student twitters the entire day - about explosions, deaths and damaged buildings. Before leaving home she checks Twitter to see where the latest shots were heard. Often, Ebaa says, Israelis whom she calls "extreme Zionists" send her digital threats. "The way they insult me is just awful," she said. In spite of those threats - or perhaps because of them - she tweets on.

A war of propaganda 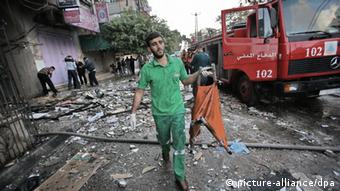 On the battlefield of social media, a war of propaganda and interpretation is underway. It is a battle in which both sides employ images of rubble fields and dead children - something like the picture of the crying BBC journalist Jihad Misharawi as he held the wrapped body of his eleven-month-old son in his arms. The picture was re-tweeted throughout the world before landing on the covers of international newspapers.

"The Israeli army and Palestinians are trying to get worldwide support through social media," said Ula Papajak from Berlin's Technical University. It is therefore no surprise that so many tweets are in English.

Even the Israeli Defense Forces (IDF) first announced their attack on Gaza through their Twitter account, @IDFSpokesperson, prior to holding a traditional press conference. Not long thereafter a warning was issued to members of Hamas via Twitter. "We recommend that no Hamas operatives, whether low level or senior leaders, show their faces above ground in the days ahead," the message said.

An answer followed promptly. It came from the Hamas Al-Kassam Brigade via its own Twitter account, @AlQassamBrigade. "Our blessed hands will reach your leaders and soldiers wherever they are (You Opened Hell Gates on Yourselves)." 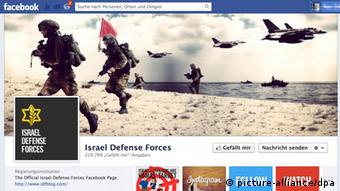 The Israeli Defense Force gives updates on its Facebook page

As both sides twitter officially without interruption, so, too, do hundreds of Palestinian and Israelis citzens. Their war is 'updated' every minute from Gaza. It is also made vivid from Tel Aviv bunkers, where entire families sequester themselves and stream their worries live on Youtube.

The extent of the coverage has even reached a point where the IDF has warned the Israeli populace against exact descriptions of rocket attacks from Gaza. "Ultimately that's information that could end up helping Hamas," said Gabriel Weinmann, a media expert at the University of Haifa. Hamas could use that information, for example, to improve the hit-rate of its rockets.

The virtual war, however, is not a level playing field. "The Israelis are more organized, they have a real propaganda machine and full-time employees and anything they need," said Asaad Thebian, a Lebanese media expert. Palestinians, by comparison, have to rely on themselves.

Every eight hours, Ebaa explains, the power goes out in Palestine. During that time all updates come from smartphones and Twitter. "Cell phone connections are so slow, it isn't easy." Still, they manage to send as many tweets as possible - some days upwards of a hundred, the student and social activist said. 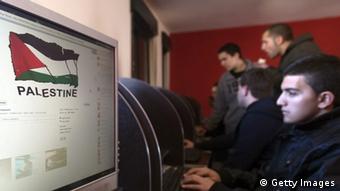 While the Palestinian power grid is down, others take over the fight. According to Gabriel Weinmann, that means hackers from Saudi Arabia or Lebanon. As recently as Monday (November 19) hackers attempted to break into his university's network, the professor explained. He is used to it. "As soon as there's war here there are always a huge number of attempts by hackers to infiltrate websites or disseminate false information."

False information about the current war is also being spread via Twitter and Facebook - pictures of dead children, for example, that are actually from Syria. That angers Ebaa. "We have to stick to the truth, or no one is going to believe us any more." Ulla Papajak also believes that pictures and information need to be verified for accuracy - even if he also understands that there is no time to do so.

Through the explosions, gunshots and the flood of Twitter updates, it is not always easy to find the truth, Ebaa admits. "Nobody actually knows for certain what really happened." That, however, is not going to stop the tweets.

For years, sirens in Tel Aviv only sounded for civil defense drills and on days of remembrance. But now, Palestinians are firing rockets at Israel's largest city and residents have to live with it. (20.11.2012)

Fearing the Gaza crisis could spread across the Middle East, EU foreign and defense ministers have jointly called for an end to the violence between Israel and Hamas. However, they found less common ground on Syria. (20.11.2012)

Are LGBTQ rights blossoming in Bhutan?