The terror group "Islamic State" has taken control of six of the eight major dams in Syria and Iraq. It is systemically exercising control by using water. The decline of "IS" now actually poses another kind of threat. 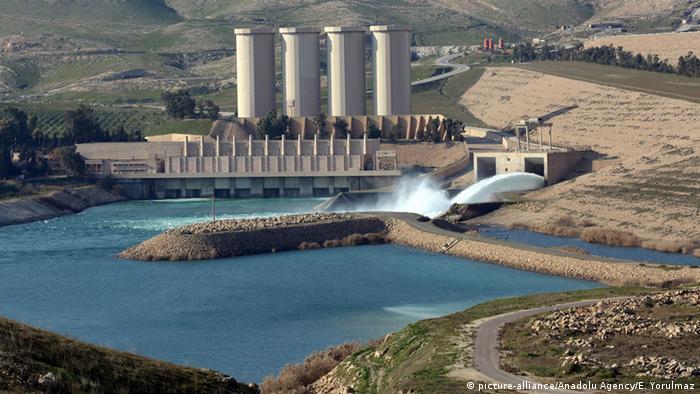 An abundant water supply means life, but excess water or water scarcity can mean death. Grave concerns have arisen over the dams that the so-called "Islamic State" (IS) has strategically taken in northern Iraq and Syria. IS controls six of the eight large dams on the Euphrates and Tigris rivers and is now continuously attacking a seventh one.

IS is specifically using the natural resource as a weapon, observes the conflict researcher Tobias von Lossow at Berlin's Institute for International and Security Affairs (SWP). "On one hand, IS is damming the river to retain water and dry up certain regions, thereby cutting off the water supply to villages and communities. On the other hand ,it has also flooded areas to drive away their inhabitants and to destroy their livelihoods," said von Lossow in an interview with DW.

IS did not come up with the idea of using water as a weapon. In World War I, the Belgian town of Niewpoort opened the gates of the Yser River at high tide and systematically flooded Flanders. The weapon proved successful at halting the advancing German army. About 25 years later, a similar plan came to a tragic end: To stop the invading Japanese during the second Sino-Japanese War, Chinese ruler Chiang Kai-shek had the Yellow River dikes in the province of Henan blown up on June 9, 1938. It was expected that the Japanese army would drown. Instead, an estimated 800,000 people drowned in the massive floods and the advancing Japanese were not halted. 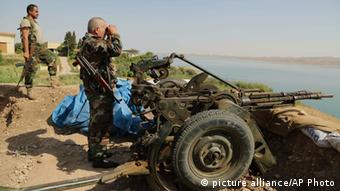 Peshmerga fighters watch out for IS forces along the Euphrates river

Water has also been used as a weapon in the Middle East. In the 1990s, Iraqi dictator Saddam Hussein had the marshes in southern Iraq drained. His goal was to punish the Shiites in the area for an uprising against his regime and to take away their livelihoods.

SWP researcher von Lossow says all warring parties in Syria have used water as a weapon, although no group does it as often as IS. He said, "IS uses water systematically and consistently. IS uses the entire range of possibilities and variations of water warfare." Von Lossow cites examples: In May 2015, IS took the Euphrates dam in Ramadi. IS then cut back half the water in the downstream flow of the Euphrates and thus limited the water supply in five provinces. In 2014, IS was able to use a dam on the Euphrates near the Iraqi city of Fallujah to defend and attack: First, the terrorist organization retained water to repel Iraqi troops on the upstream side. Then, it drained water and caused massive damage downstream and as a consequence, 60,000 people had to flee. 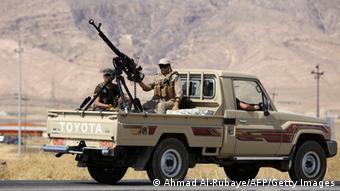 This background explains the international alarm when IS fighters captured the dam on the Tigris in Mosul in August 2014. It is the largest Iraqi dam and almost half of Iraq's power supply relies on its operation, as does the water supply in the Kurdish regions. Control of the dam meant that IS could have dried up large parts of Iraq. At worst, IS could have blown up the already crumbling dam, which would have resulted in a 20 meter high tidal wave in Mosul. It would have still been five meters high by the time it reached Baghdad, and then a half million people would have lost their lives. With massive American air support, Iraqi troops and Kurdish fighters were able to recapture the crucial dam in just over a week.

Water, a weapon of mass destruction

Apart from cutting off water and flooding, there is another way of using water as a weapon: contamination or poisoning. In December 2014, IS made water unsafe to drink south of Tikrit by putting crude oil in it, according to von Lossow. IS wanted to use this method on European soil in July 2015: IS supporters tried to poison the largest water reservoir in the Kosovan capital Pristina but were exposed just before they committed the act.

The greatest threat is the mounting pressure on IS, says von Lossow. If IS is pushed back by the military and is weakened, it would lose large parts of its territory and population. Subsequently, IS would see itself forced to fight its final battle against its enemies while it stands on the verge of the apocalypse. In this situation, IS could possibly try to blow up dams on the Euphrates and Tigris, thereby opening the floodgates, making water a weapon of mass destruction.

State troopers have killed several militants of the "Islamic State" who were planning to carry out an attack in Jordan. The country is a member of the US-led coalition against the jihadists in Syria and Iraq. (02.03.2016)

Syria's ceasefire: Many players, many obstacles

The ceasefire has its weaknesses - but it's the best hope yet of progress in Syria. Where the civil war goes from here will be decided, above all, in Aleppo. (27.02.2016)