The European Council has awarded the Vaclav Havel Human Rights Award to Nadia Murad. The activist was raped, tortured and sold into sexual slavery by the "Islamic State" in Iraq. 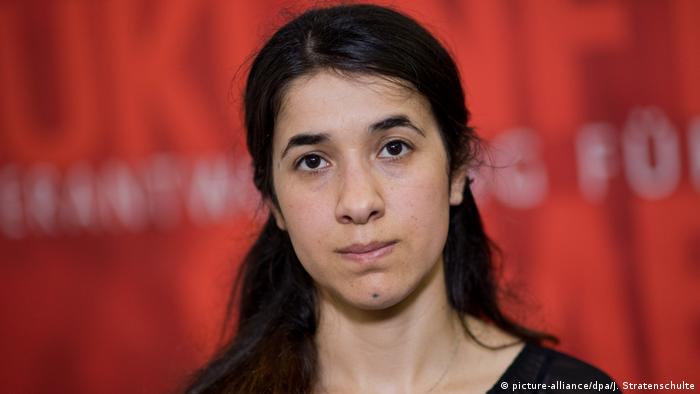 At an awards ceremony in the French city of Strasbourg on Monday, 23-year-old Nadia Murad became the fourth person to receive the Vaclav Havel Award.

Established in 2013, the international prize is awarded annually to honor outstanding civil society activities that promote human rights and is endowed with 60,000 euros ($66,981). It is presented in memory of Vaclav Havel, the former president of Czechoslovakia and the Czech Republic, and replaces the Council of Europe Parliamentary Assembly Human Rights Prize.

Murad was taken from her home village of Kocho near Iraq's northern town of Sinjar in August 2014 and brought to "Islamic State" (IS)-controlled Mosul, where she was gang-raped, and bought and sold many times, along with thousands of other Yazidi girls and women. Many have since died, or remain in captivity.

After three months of captivity, Murad was able to escape and has since been resettled in Germany.

Following her ordeal, Murad has called for justice for the victims of the jihadist group and argued that the 2014 attack on the Yazidis should be recognized as genocide.

Speaking at the awards ceremony in Strasbourg on Monday, Murad called for a special court for the crimes against the victims and denounced the fact that no one had been punished.

"There hasn't once been an attempt to collect any evidence," Murad said. "No one is willing to document all of this."

"Life was unjust to me," Murad said, adding that it didn't make her happy to speak at conferences and meetings.

Last month, Murad was appointed as the United Nations (UN) goodwill ambassador. UN Secretary-General Ban Ki-moon, who presented Murad with the distinction, said he had been moved to tears when he heard her story, which she first shared during a UN Security Council meeting in 2015.

"Nadia shows with her life how important it is to fight for trafficking victims," he said. "They deserve justice. And when we empower them, they can help transform our world."