A Yazidi woman who was raped, tortured and sold into sexual slavery by the "Islamic State" in Iraq has been appointed UN goodwill ambassador. Nadia Murad Basee Taha will raise awareness of human trafficking. 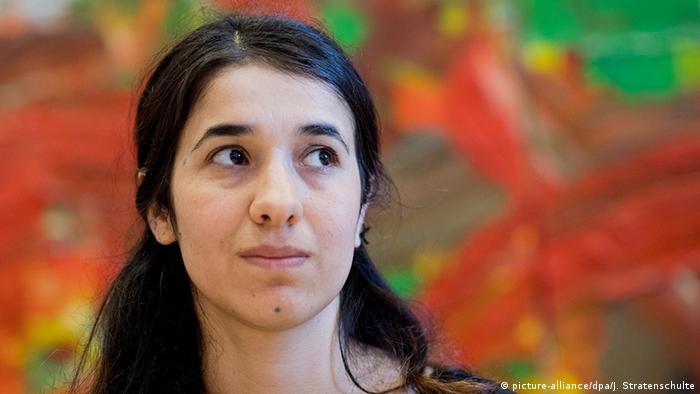 At a ceremony at the UN headquarters in New York on Friday, Nadia Murad Basee Taha became the first trafficking victim to take up the position of UN goodwill ambassador.

Murad was taken from her home village of Kocho near Iraq's northern town of Sinjar in August 2014 and brought to "Islamic State" (IS)-controlled Mosul, where she was gang-raped, and bought and sold many times, along with thousands of other Yazidi girls and women. Many have since died, or still remain in captivity.

After three months of captivity, Murad was able to escape and has since been resettled in Germany.

Following her ordeal, Murad has called for justice for the victims of the jihadist group and argued that the 2014 attack on the Yazidis should be recognized as genocide. 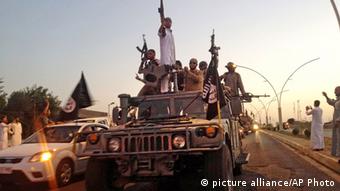 Some 3,200 Yazidi women and girls are still being held as sex slaves by IS fighters

"I was used in the way that they wanted to use me. I was not alone," Murad said during Friday's ceremony.

"Perhaps I was the lucky one. As time passed, I found a way to escape where thousands others could not. They are still captive."

UN Secretary General Ban Ki-moon, who presented Murad with the distinction, said he had been moved to tears when he heard her story, which she first shared during a UN Security Council meeting in 2015.

"Nadia shows with her life how important it is to fight for trafficking victims," he said. "They deserve justice. And when we empower them, they can help transform our world."

'We cannot let this happen'

As a goodwill ambassador, Murad will focus on raising awareness of the plight of victims of trafficking, especially refugees, women and girls.

"Maybe I lived so that I would be able to use my heart and soul and my words to be their voice," she said.

The 23-year-old also called on Friday for the release of some 3,200 Yazidi women and girls still being held by IS fighters as sex slaves and for the captors to face justice.

"My real fear is that once ISIS is defeated, ISIS militants, ISIS terrorists will just shave off their beards and walk the streets of the cities as if nothing has happened," she said, using an alternative acronym for the jihadist group.

"We cannot let this happen."

Murad said her hope was that one day Yazidi victims will be able to look "our abusers in the eye before a court in The Hague and tell the world what they have done to us, so that our community can heal." 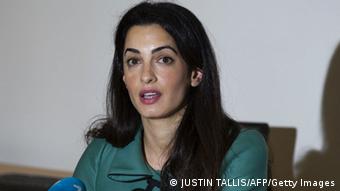 Renowned human rights lawyer Amal Clooney, who represents Murad, called on the international community to ensure that IS members are prosecuted for their crimes.

"We know that what we have before us is genocide and we know that it's still ongoing. We know who the perpetrators are," Clooney said.

"Yet two years after this genocide began ... not a single member of the 'Islamic State' has been prosecuted in a court anywhere in the world."

As world leaders gather next week for the annual UN General Assembly, Iraq and the UK are due on Monday to launch a campaign to push for accountability for crimes committed by IS.

Murad and Clooney are due to attend the event along with British Foreign Secretary Boris Johnson.

No end to 'Islamic State' murders of Yazidis

"Islamic State" has been enslaving and murdering Yazidis in Iraq for two years. Advocates of the religious and ethnic minority say there's still no end in sight. (17.06.2016)