Thousands of victims of "Islamic State" terror have been found in more than 200 mass graves in Iraq. The identities of many those killed may never be discovered. 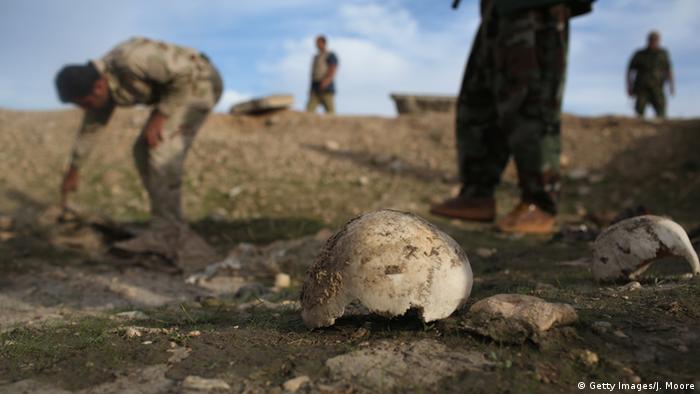 More than 200 mass graves containing thousands of bodies have been found in areas formerly controlled by the "Islamic State" (IS) group in Iraq, the UN said in a report on Tuesday.

The size of 202 mass graves found ranged from containing the bodies of eight victims to one site south of Mosul holding thousands of bodies, UN Assistance Mission for Iraq and the UN Human Rights Office said.

The report estimates that between 6,000 and 12,000 victims were buried at the sites spread across  Ninewa, Kirkuk, Salah al‐Din and Anbar governorates.

"They contain the remains of thousands of victims, the majority of whom may never be identified," the report said, noting that more mass graves are likely to be found.

“The mass grave sites documented in our report are a testament to harrowing human loss, profound suffering and shocking cruelty," said Special Representative for Iraq of the Secretary-General of the United Nations Jan Kubis. "Determining the circumstances surrounding the significant loss of life will be an important step in the mourning process for families and their journey to secure their rights to truth and justice."

At least 30,000 civilians have been recorded killed as a result of the conflict with IS in Iraq between the beginning of 2014 and the end of 2017.

During its three year reign of terror persons opposed to the group's ideology and rule were targeted, including minorities such as Christians and Yazidis. The jihadist group set up courts that executed countless people through such brutal means as  public beheadings, burning people alive or throwing persons off buildings.

IS has largely been pushed back across Iraq and Syria but remains a long-term guerilla threat with between20,000 and 30,000 fighters in desert and rural areas, the UN said in August.

Germany ready to 'help Iraq back on its feet'

German Defense Minister von der Leyen has met with Iraqi officials to determine how to continue to assist authorities in the country. But a debate about the Bundeswehr's role in the region could soften its commitment. (16.09.2018)