The recently liberated Iraqi town of Qayyarah near Mosul is marked by the horrors of "Islamic State" (IS) rule. As Florian Neuhof reports from Qayyarah, its residents are struggling to cope with the jihadists' legacy. 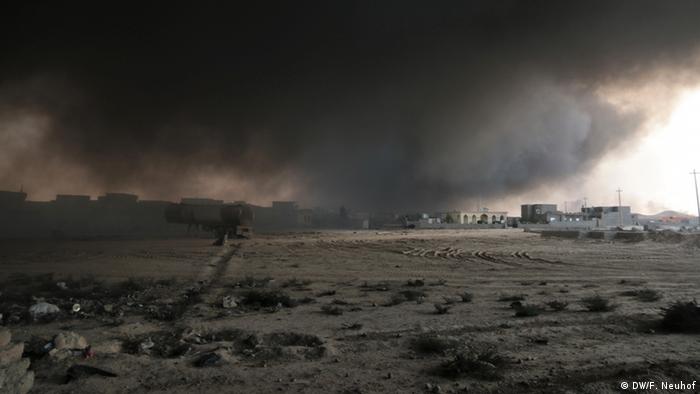 Two years ago in June, the police officer living in the house opposite Hassan fled, and the town's new rulers moved in. After routing the army in Mosul, IS militants stormed across Nineveh province in northwestern Iraq and occupied Qayyarah, a dusty town on the banks of the Tigris river.

Hassan, a friendly 49-year old who lives with his family in a residential area not far from the town center, soon realized that something sinister was going next door. From his roof top, he saw the jihadists lead men into the courtyard, where they were brutally beaten. Prisoners were dragged into the house; their lifeless bodies would be discarded days later.

"The corpses were kept in a freezer," Hassan told DW pointing to the gloomy interior, where blood-stained matresses were heaped on the floor, and sheets of metal were welded against windows to turn bedrooms into prison cells.

A senior IS member called "Abu Najid" lived here until Iraqi special forces expelled the terror group from the town in a two day battle late in August. Known as the "blood judge" among the neighbors, he decided on the fate of those who fell foul of IS.

After being tortured to extract a confession, prisoners were often murdered by hanging them from a hook in the ceiling, plunging to their deaths when a chair was kicked from underneath their feet, says Hassan Abid, an officer with the Iraqi army, standing in the 'execution room' where these killings took place.

Abu Najid the blood judge made use of his prominent status within the terror group, keeping four Yazidi women as sex slaves, says Hassan. They, like thousands of unfortunate Yazidi women, were distributed among the insurgents after they were captured when IS advanced into the Sinjar area in August 2014.

Sometimes, the women were allowed outside without an escort, and used the opportunity to plead for help. "The Yazidis would ask the neighbors to send messages to their relatives. When an IS patrol saw them talk to the locals, the judge beat them," said Shema, Hassan's eight year-old daughter who often spoke to the women. 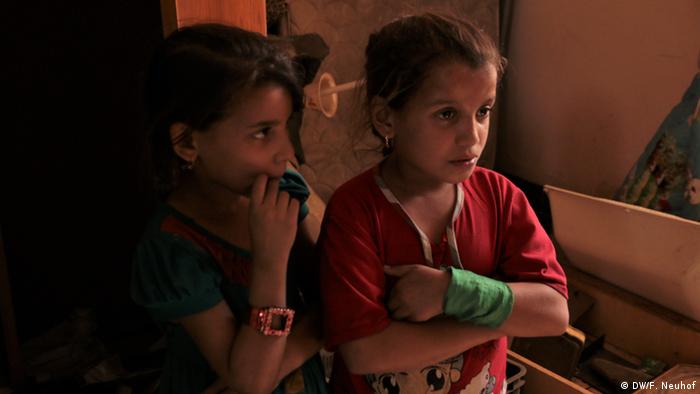 Shema (right) and her sister in a house on their street that was used by IS to torture and kill dissenters.

Abu Najid took the four women, who neighbors say were all under the age of 30, with him when he fled Qayyarah. A few discarded dresses that lie on the patchy lawn outside the house served as a reminder of their plight.

IS established five such grim prisons in Qayyarah, a town of perhaps 20,000 souls, residents say. Its reign of terror pervaded everyday life, with the Hisbah, the IS' morality police, enforcing the group's medival interpretation of Islam.

"If you come to the market, you see Daesh and the Hisbah, they look at who has short beards, long trousers, or maybe the wrong haircut," said Ahmed, a 42-year old English teacher, using the Arabic acronym for IS. 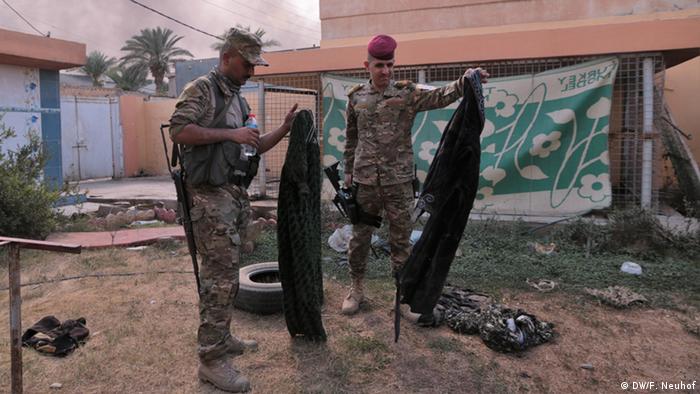 Even minor transgressions would be punished with lashings, Ahmed told DW.

The insurgents' extremism alienated the townsfolk, and opposition formed in spite of the harsh retaliation meted out to those caught resisting. When Iraqi special forces came within reach of Qayyarah, a small group of men picked up the guns they had hidden away and stood up to their oppressors, according to Major General Najim al Jabouri, the head of the Nineveh Operations Room who is in charge of operations in the area.

"We contacted some people inside Qayyarah before the battle. When our troops moved close to the town they rose up and [...] fought IS in the city. This helped our troops to control Qayyrah without any civilian casualties," the general told DW from his headquarters in the nearby town of Makhmour.

Throughout Qayyarah, the relief of being rid of IS is palpable. Iraq's Sunni population held major grievances against the Shia-led government and its security forces, and these were readily exploited by the insurgents as they took over a third of the country. But the horrors of the past two years have disqualified IS as a viable alternative to Baghdad's imperfect rule in the eyes of Qayyarah's inhabitants, who are Sunni.

"Everyone knows what Daesh is. If you had the idea to join Daesh before, you have to erase that idea from your mind," said Ahmed, who was left without work when IS closed the local schools.

For those who need reminding of the misery that IS brought to Qayyarah, plumes of thick smoke continue to rise from the oil wells that the insurgents set on fire before they retreated. The black smog has enveloped entire neighborhoods, as engineers struggle to contain the fires weeks after the town was liberated. It is affecting the health of the local population, and inhabitants complain about difficulties with breathing and allergic reactions.

Scarred by their experience with IS, the locals are well disposed to the army units guarding Qayyarah against a return of the terror group. "The Iraqi army is our army," said Ali Mohammed Abdullah, a retired local government official. 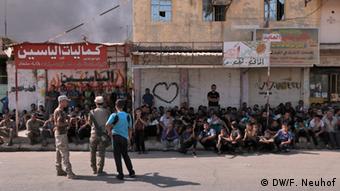 The Iraqi army has been welcomed back

This augurs well for government forces and the future of Iraq. Qayyarah is barely 60 kilometers from Mosul, the final IS stronghold in Iraq, and the second-largest city in the country. Mosul is a Sunni city, and a hostile population would jeapardize the security forces' push toward and then into the IS bastion, Jubouri believes.

If the sectarian divide between Sunnis and Shias is not bridged, the future of the country would remain bleak, he added. "We need reconcilliation in Iraq."

Reconcilliation does not amount to leniency toward those who threw in their lot with IS. Even weeks after the town was retaken, local men are still herded onto the street or into public buildings, where they are kept for hours as the security forces search for collaborators. Identities are checked and ad hoc public courts are formed to determine the fate of those accused of joining the insurgents.

"Sometimes the people of Qayyarah say this guy is good, and [the security forces] leave him. If not, they take him away," said Ahmed, who was part of a group of men undergoing a screening on Qayyarah's main road.

He and the other men in the group are bitter toward those who turned on their neighbors by helping IS. Having already come close to breaking up the country by fanning the flames of sectarian hatred, the terror group also leaves a legacy of broken local communities in Iraq's Sunni heartlands.