Since conquering the Libyan town of Sirte, "Islamic State" has imposed a severe regime on the remaining locals as foreign fighters and their families have moved into abandoned homes. Nancy Porsia reports from Libya. 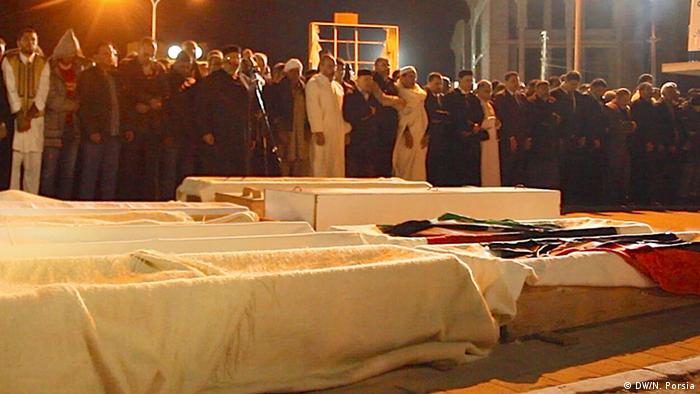 A dim light bulb breaks the darkness of the night as the man, eyes downcast and frantically scratching his head, sits down on a makeshift stool of bricks outside his new house. Here in Misrata he and his family found shelter after his son was killed by "Islamic State" fighters in his hometown of Sirte. "He was only 22 years old," the man says, declining to disclose further information about his son or his family, fearing retaliation against relatives left in the city. "We were prevented by the fighters from holding a funeral in Sirte, so here we are …"

Dozens of people have come to pay their condolences, and a glimpse of the long line of men wrapped in traditional white cloaks looms even here in the shadowy corner where the grieving father has come to take a break from the two days of hosting mourners. He is tired, so his oldest son steps in to save him the trouble of relating the family's travails.

"Last August my brother disappeared, and we sent someone to search for him," the man says. At Rabat Mosque, which in June had been converted into an Islamic court, and at IS's detention center, previously a kindergarten, leaders of the "Caliphate" initially denied arresting him. Only after a week was the family informed that the young man was being held at the former kindergarten, but no official charges were conveyed. "In late October we were told he had been executed."

His brother's death appears not to be the only nightmare disturbing the man. Reaching out for his father's shoulder, he begins recalling the final scenes before fleeing Sirte. He was in Martyrs Square, the car market, when two ambulances rushed in. Seven men blindfolded and wearing orange overalls were on display in the middle of the square. Then five of them, dark-skinned foreigners accused of apostasy for smoking, were given lashings on their backs. "Now you are clean and our brothers in the faith again," one of the fighters pronounced, taking them away, the man says.

The two others, Libyans indicted for sorcery, were first given hijama cupping, a therapeutic remedy mentioned in the Koran, then were forced to their knees. "It was a sort of makeshift guillotine," the man says, still under shock. "Then a man in a black balaclava decapitated them." The beheadings he apparently witnessed were those of Adel Hafez, who was in his 50s, and Saed Al Ma'dani, in his 80s, both reportedly Sufi, an Islamic sect that IS rejects. "A friend of mine was in the first row, and he saw the old man crying like a child," the man whispers.

First IS province outside Syria and Iraq

Located on Libya's central coast, Sirte was the first town IS took and declared an Islamic province outside of the movement's homeland in Syria and Iraq. The hometown of the late Libyan dictator Moammar Gadhafi, Sirte was conquered by the al Qaeda-affiliated group Ansar al-Shariah, which exploited the power vacuum that followed the regime's fall in 2011. 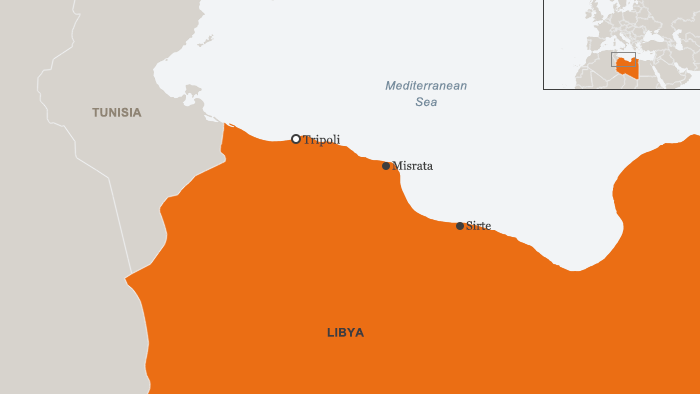 "Since then Ansar al-Shariah has controlled the city. You could recognize them because they did not raise the Libyan flag," the deputy mayor of Sirte, Makhlouf Ramadan Salem, now resettled in Misrata, told DW.

IS succeeded in exploiting the deep divisions in Libya - which had resulted in the existence of two rival governments - and took control of Ansar al-Shariah. In February hundreds of fighters pledged loyalty to the so-called caliphate of Abu Bakr al-Baghdadi. The porous border in the southern desert fuelled the arrival in the city of dozens of foreign fighters from Mali, Somalia and Sudan, and the group quickly grew, as religious leaders called emirs came to Sirte by boat and via Derna - IS's previous stronghold in Libya - from Egypt, Iraq, Pakistan Saudi Arabia and Yemen, according to a military intelligence source in Misrata. The rapid growth of the terrorist group in Sirte pushed Misrata forces to Abu Ghrein, 140 kilometers (90 miles) west of the city.

"Six months ago IS counted a [handful] of 300 fighters, and they had only PKTs, Kalashnikovs and other such light weapons, but today they even have anti-aircraft artillery and bombs," Ibrahim Bet-Almal, deputy head of Misrata military intelligence, told DW.

Escape from the horror show

The horror show in Sirte started in earnest in August when an insurrection of the powerful local Farjan tribe was brutally ended with the public beheading of 12 members. IS began imposing a harsh interpretation of Islamic law on the people of Sirte, banning music, forcing women to wear veils and crucifying people.

"Suspected infidels, such as shopkeepers who violate the prayer-time curfew or cigarette-smokers, are brought to [the Islamic court at] Rabat Mosque to pledge istitaba [in which they must seek repentance]. They take a picture of you and then release you. It's a warning," a woman who fled Sirte with her family a few months ago explained. "Since last July all women must wear a niqab covering the entire body," she said. Her family left Sirte after they determined it was no longer safe to go to the hospital where they had often taken their father for treatment. "IS fighters started to question us about one of our brothers who died in Sidra fighting with Misrata forces."

The hospitals in Sirte are completely under IS control. "They have a list of doctors and nurses working there, and if anyone of them does not show up in the morning, they go to search their houses," the woman said. Today she and her three children share a 40-square-meter house in a Misrata suburb with both her sister's and brother's families as well their elderly father. "Here we must pay rent, but we ran out of money as my husband has not received his salary since last July," she said. 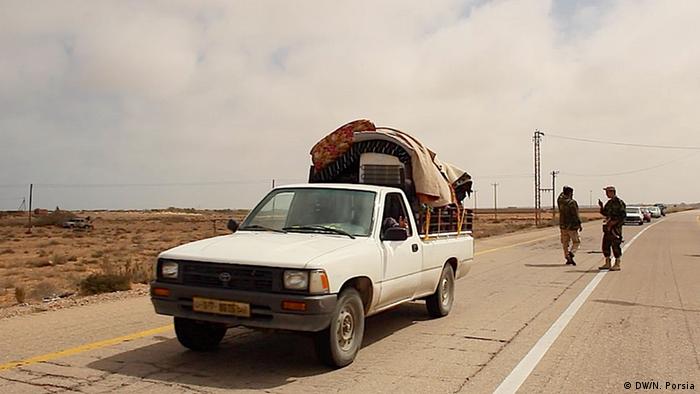 IS introduced a severe taxation system to raise funds in the town. Subsidized goods, such as fuel, wheat and oil, are no longer available in the city as the caliphate hoards them. "Anyone who dares to bring wheat inside is going to be kidnapped," said a teacher who had gone back to Sirte to recover belongings he left behind when he and his family fled in August.

The teacher returned to his home to find it had been spray-painted with graffiti that read: "This house belongs to Daesh." A man appeared on the scene and, speaking Arabic with a strong Egyptian accent, introduced himself as Abu Obeida and took the teacher's phone number. After placing a call, the man notified the teacher that he would contact him and tell him when it was the right time to pick up his belongings. "IS pushes local residents to flee," the teacher said. New families are replacing the previous residents as spouses and children from abroad join IS fighters in Sirte. "They are Muslims from Pakistan, Somalia and other countries. And each man has two or three spouses," the teacher said.

Migrant workers have also come to Sirte to join IS. "They get paid in euros and dollars, and this is their best opportunity," Deputy Mayor Salem told DW.

Retreat from IS heartland

According to a recent UN Security Council report, IS counts around 3,000 fighters in its ranks, half of whom are in Sirte, to which top commanders withdrew after foreign forces began massive airstrikes on the movement's "heartland" in Syria and Iraq.

"Fewer than 500 fighters are from Libya, and all the rest are foreigners," Misrata military intelligence commander Bet-Almal told DW. The international community is especially concerned about the massive presence of the IS fighters in Sirte due to the city's proximity to Libya's oil region and the oil terminal hub in Sidra.

In the country's west, the caliphate has rapidly increased its military strength. Sleeper cells, allegedly hidden for the past year in the town of Sabratha, 70 kilometers from the Tunisian border, recently paraded through the town's streets.

Libya's two rival governments have signed a UN-backed deal aimed at putting an end to violence between militias loyal to each. Diplomats hope the agreement will help combat a growing "Islamic State" presence. (17.12.2015)

What have we learned in Afghanistan, Libya and Iraq?

International military interventions in Afghanistan, Iraq and Libya have led to some of the worst possible outcomes. Will the United States and Europe repeat their past mistakes in their war on the "Islamic State"? (06.12.2015)

In Tunisia, many young people heed the call of 'IS' and al Qaeda

More than 5,000 Tunisians are currently fighting for al Qaeda and the "Islamic State." Extremists have been especially successful at recruiting youth there. Sarah Mersch reports from Tunis. (26.07.2015)