UNESCO and Washington have condemned the destruction of Iraq's oldest Christian monastery by the "Islamic State" militant group. St Elijah's, near Mosul, joins a growing list of destroyed religious and historical sites. 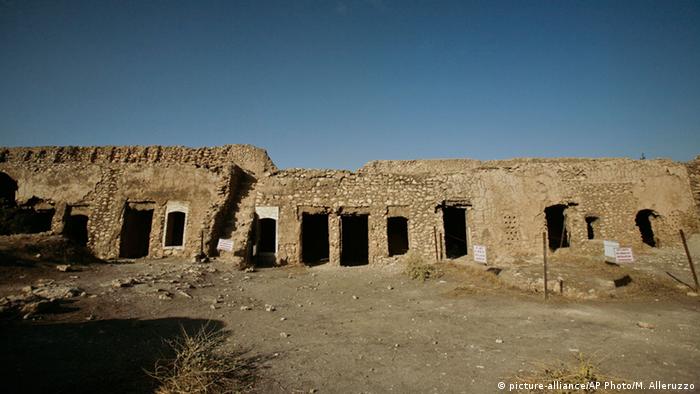 Satellite pictures on Wednesday showed that the monastery had been completely razed, save for "a few piles of rubble."

St. Elijah's Monastery, the oldest Christian monastery in Iraq, appeared to have been yet another victim of efforts by "Islamic State" (IS) to destroy heritage sites it considers to be heretical.

Imagery obtained by the Associated Press News Agency showed that the stone walls that had stood for 1,400 years had been pulverized. The razing of the monastery appeared to have taken place in late September.

"Despite their relentless crimes, extremists will never be able to erase history," said Bokova. "It also reminds us how terrified by history the extremists are, because understanding the past undermines the pretexts they use to justify these crimes and exposes them as expressions of pure hatred and ignorance."

In a press briefing on Wednesday, State Department spokesman Mark Toner condemned the destruction by IS.

"They continue to carry out these kinds of depraved acts, and it really symbolizes or exemplifies their bankrupt ideology," he said.

The monastery, locally called Dair Mar Elia, is named after Assyrian Christian monk St. Elijah - who built it in the sixth century. It was a holy site for Iraqi Christians for centuries, belonging to the Chaldean Catholic community.

There was tragedy in 1743, when as many as 150 monks who refused to convert to Islam were massacred under orders of a Persian general. The monastery was damaged, but for the next two centuries remained a place of pilgrimage

More than 100 religious and historic sites have been looted and destroyed since the group seized swathes of eastern Syria and northern Iraq, including mosques, tombs, shrines and churches.