Terrorists of the "Islamic State" (IS) have clashed with anti-government militia near Syria's northeastern town, Marea. The IS is meanwhile trying to defend its stronghold in Raqqa, in the country's east. 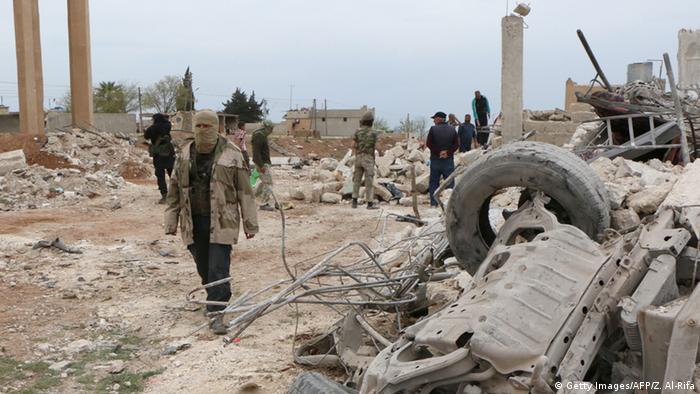 "Heavy clashes took place overnight between IS fighters and rebels inside the walls of Marea town," the Syrian Observatory for Human Rights told AFP news agency.

Fighting began after the terrorists launched a shock attack in Aleppo province on Friday, cutting off the connecting road between Marea and Azaz, 20 kilometers (12 miles) from the Turkish border. Azaz is located on a key supply route for rebels battling President Bashar Assad's forces in the area.

Around 15,000 civilians were trapped inside Marea because of the fighting. News agencies reported that altogether 160,000 people in neighboring villages were stranded because of the violence. Human rights organizations warned of a potential humanitarian crisis.

Meanwhile, IS troops were busy trying to defend their territory in Raqqa, where US-led coalition planes have been conducting airstrikes since Tuesday, according to Syrian Observatory Chief Rami Abdel Rahman.

Rahman claimed the bombing was aimed to bolster an offensive by the US-backed Syrian Democratic Forces, who mainly consist of Arabs and Kurds. Civilians were attempting to flee the city, which has become the de facto capital of the IS in Syria.