Is Russia′s opposition on the verge of collapse? | Europe| News and current affairs from around the continent | DW | 08.03.2012

Is Russia's opposition on the verge of collapse?

The anti-Putin opposition movement is at risk of falling apart just days after Russia's presidential elections. Some prefer to march in peaceful demonstrations, while others have opted for confrontation with the Kremlin. 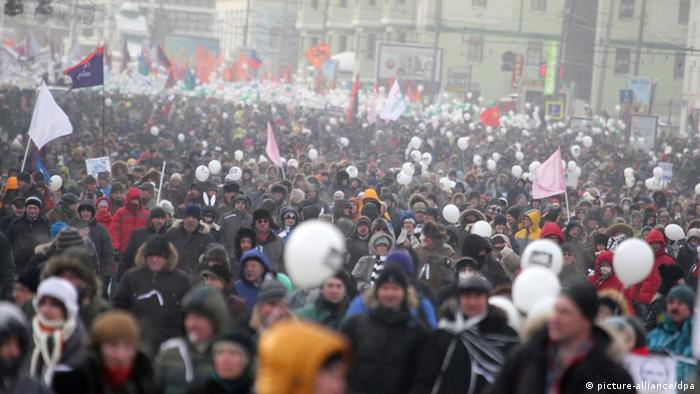 "Testy" would be the right word to describe the mood among members of the Russian opposition these days.

"You can condemn the police's actions, but you have to recognize that some of the rally's organizers provoked the violence," said Sergej Mitrochin, head of the liberal Yabloko party, on his blog on the internet platform LiveJournal.

Russian riot police and protesters clashed on Monday at a rallye on Moscow's Pushkin Square, a day after Vladimir Putin's victory in the presidential election.

The big rally against vote-rigging - questioning the official election result that gave Vladimir Putin two-thirds of the vote - went on peacefully until hundreds of police in full riot gear violently dispersed several hundred protesters who had vowed to stay, detaining about 250 people. They were later released. 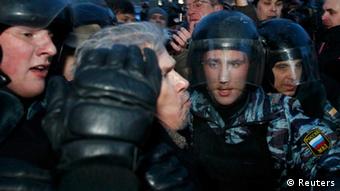 Clashing with police at a rallye for fair elections

Udaltsov in turn has accused the head of Yabloko of splitting the opposition movement. The war of words between the opposition leaders shows the cracks in the new movement that evolved in Russia after parliamentary polls in December 2011.

For the past three months, tens of thousands of people have been taking to the streets, particularly in Moscow, to protest against election fraud and to fight for more democracy. The protests have been largely peaceful. But that might be about to change. "After the presidential election, the movement might split into a peaceful and radical wing," Leonid told DW. The Moscow city employee, who has participated in all of the protest rallies, said he rejects violence and unauthorized action. "We can only force our leaders to launch liberal reforms by peaceful protests," Leonid said.

A division within the opposition movement - an alliance of leftist and rightwing liberal politicians, nationalists, globalisation critics, representatives of the urban middle class, senior citizens and students - would hardly come as a surprise. They're all clamouring for more democracy, but their ideas about a future society couldn't be more diverse. The popular Russian music critic and blogger Artemij Troizkij has described the movement as a kind of "Noah's ark."

Observers believe the Kremlin might try to break up the protest movement. Billionaire presidential candidate Mikhail Prochorov could assume that role. Prochorov won many votes in Moscow and other major cities and, encouraged by Putin to found a new liberal party, the Moscow billionaire told protesters at a rally on Pushkin Square that he would advocate their interests. 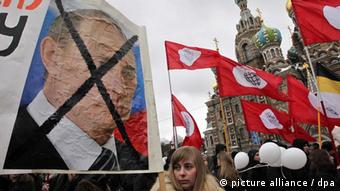 Protesters want Putin to step down

The post-election protests showed the opposition is by no means homogenous. Easily 14,000 fewer people showed up for the rally on Puschkin Square than at previous protests. "Supporters of the opposition are discouraged because their leaders can't agree on how to deal with Putin's victory," said Ilja Konstantinov, a Moscow political expert.

More protests are planned for Saturday, March 10. Yabloko party leader Mitrochin has appealed to the more radical members of the opposition to hold a separate event. "People aren't interested in showing up only to have their heads bashed in," he wrote in his blog and warned that security forces were still prepared to intervene with full force.

Mitrochin said he feared a segment of the middle classes might turn away should there be renewed clashes with the police, letting the movement backslide to a time when only a few hundred people would take to the streets in protest - and were regularly beaten and detained by police.

The main goal of the protests is to force Putin to step down, opposition leader Ilya Yashin, who was detained at the rally in Moscow on Monday, told DW.

Political observers say the opposition not only faces a long-drawn out struggle - in order to mobilize people, they'll have to come up with new ideas, too.

Russian authorities release protesters arrested at an anti-Putin rally in Moscow. Questions about the legitimacy of the president-elect's victory remain. (06.03.2012)

German politicians have called Russia's presidental election a 'cynical event.' They also criticized Putin's lack of plans for reform, and suggested that the new president will come under pressure to modernize. (06.03.2012)

A major protest in Moscow against President Vladimir Putin's election victory has closed with arrests. World leaders, meanwhile, have "taken note" of Putin's landslide win, asking that he investigate irregularities. (05.03.2012)