Iraqi courts are fast-tracking cases in court against "Islamic State" (IS) members, but there is concern about the diligence of the speedy process. Judit Neurink reports from Qaraqosh. 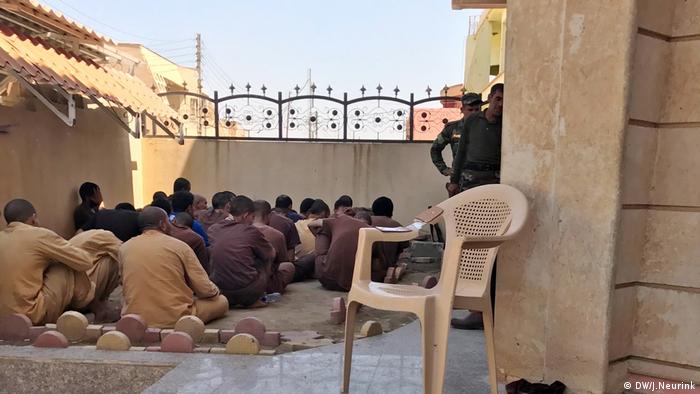 "I am looking for my son," says a woman dressed in black outside the high walls of the Iraqi court where those accused of membership of "Islamic State" (IS) are on trial. Her son was picked up eight months ago, together with the rest of their village, some 275 men in total. "Some were released, but he was not. But I know he is innocent."

Sariah Yahya tells DW that she searched for him everywhere. But her son Luay, a farmer with two children, is not listed in any of the informal prisons where Iraqi army units are holding their IS prisoners. Now she has come to check for his name at the court of investigation based in the Christian city of Qaraqosh. "No mother of a Daeshi would dare ask for her son," she points out as proof of his innocence, using the group's Arabic name.

She stares at the black truck arriving with prisoners, and at the mostly young men as they file through the gate of the court into the garden, where they are made to kneel and wait. Her disappointment is palpable — her son is not among the handcuffed, blindfolded, shaven-headed men who will appear in their brown and yellow prison overalls before one of the investigative judges. 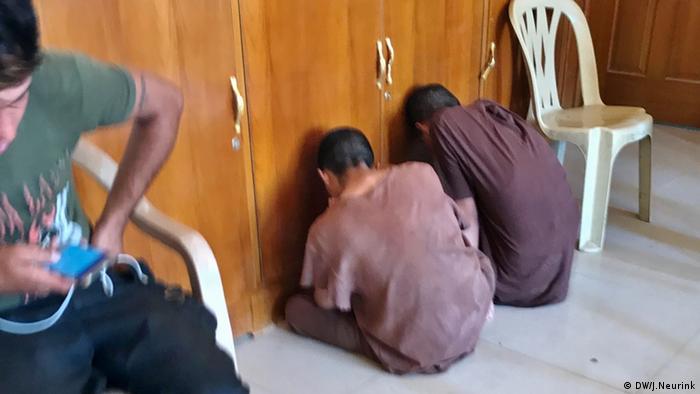 The court in Qaraqosh is one of two special investigative courts set up to deal with IS members; the other is in Mosul. It is based in a town that bears the scars of the group's cruel rule, and the destructive fight against it. Qaraqosh is now mostly smoke-blackened by the fires IS lit to distract the bombers, and many houses and most of the churches have been destroyed. Most of the inhabitants have not returned since they fled in 2014, and apart from the bustle of the courts, the town is mostly empty. A civil court next to the IS court allows people to claim damages and have papers authenticated — a meeting place for both victims and perpetrators.

Here, at the investigative court presided over by Younes Mahmoud al-Jumaidi, some 50 cases a day are processed by 10 judges and six prosecutors. A local woman stands at the desk in the judge's air-conditioned office. Only when she has been led away does the judge point out that she is one of the accused. Yet the great majority are men, some of whom continue to deny their guilt despite clear proof against them. "The law does not protect the stupid," al-Jumaidi says.

Many admit to joining IS but say they were cooks or guards and claim not to have killed or wielded authority. They know this could mean the difference between prison and execution. After the charges against them are prepared, they will be tried before a special criminal court either in Qaraqosh or in Baghdad. Most of the bigger fish, as well as the foreign fighters, have been moved to the capital for trial.

"There will always be an appeal, even without the accused requesting it," al-Jumaidi tells DW, "for these cases could lead to a death sentence." He is reacting to criticism from human rights organizations like Human Rights Watch who say that the speed of the proceedings is putting the court's due diligence at risk. "Most are arrested on the basis of clear evidence," he points out, and all have a lawyer. Even if the family does not provide one, the court will.

The court bases its decisions on information from the military forces that captured them and also from neighbors and other civilians who filed reports against the alleged perpetrators. And that is where it can go wrong, says Seif Rubaie, one of the lawyers who is waiting outside the gate for his client to be led before the judges. Sometimes denunciations were made to settle old scores, with the accused held for months only to be released when their innocence could be proven. This is the case with up to 20 percent of all the prisoners brought in front of Al-Jumaidi's court. 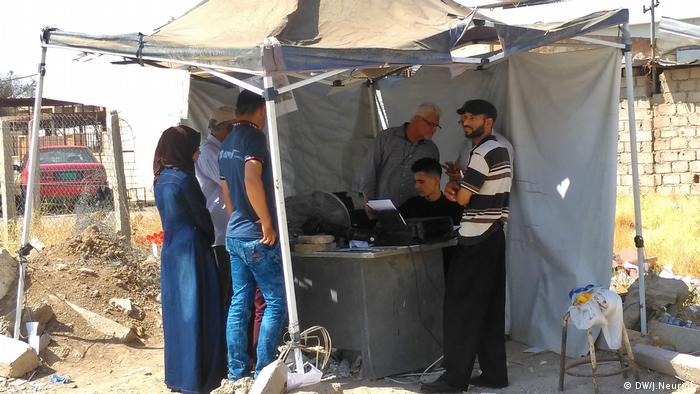 Others were falsely accused because they have the same name as someone on the official lists of IS members, says Rubaie. This is a major problem in a country where people are recorded using their father's and grandfather's name rather than a family name, because the same combinations occur all the time. Rubaie takes on only clearly innocent clients — "I do not represent any Daesh member with clear evidence against him."

When asked how this could be compatible with justice, he agrees that everyone should have the right to a fair trial. "It's personal. Even if they offered me $1 million, I would not defend them. I lost my home and my business because of Daesh," he tells DW.

His complaints center mainly on the prisons, where his potentially innocent clients "are held alongside IS criminals — which is not fair," he says, describing the jails as overcrowded and so hot that some prisoners have died. He has not been able to see his clients there, as nobody can visit these prisons apart from the International Red Cross. Human Rights Watch has described these informal jails, housed in private dwellings and run mostly by the military, as too crowded with standing room only and with hardly any sanitation facilities.

According to Rubaie, around 1,000 prisoners are being held in this kind of facility in the city of Qayyara alone (60 kilometers from Mosul). However, the total number of IS prisoners in custody is not known, just like there is no register of the many Iraqis currently missing, like Sariah Yahya's son.

Nobody is under any illusion that all the perpetrators will be tried. Some may escape by paying the right person in the force holding them — which Sariah Yahya implies was the case with those of her fellow villagers who were set free after their arrest. And while the bodies of purported IS members killed by civilians or the military wash up daily on the shores of the Tigris river, IS attacks on civilians and villages also continue.