For over two years, the Iraqi Christian town of Qaraqosh was the favorite abode for many leaders of the "Islamic State" (IS) group. Judit Neurink reports from Irbil. 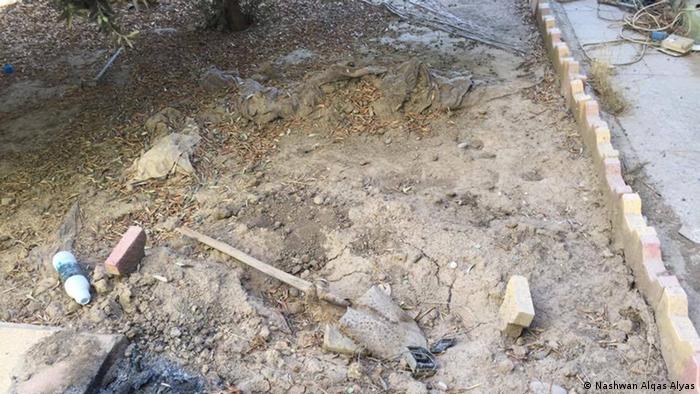 "The best houses were occupied by their leaders," says Father Ammar of the Syrian Catholic Church, who works closely together with the Bishop of Mosul. He flicks through his phone until he finds a picture, and reads out several names, all starting with Abu: "They wrote their names on the wall of our Church of The Immaculate. And one of their leaders lived in the house of the church," he told DW.

Since August 2014, when IS fighters overtook the Christian towns of the Nineve Plains, Father Ammar has been living in the Christian enclave Ankawa of the Kurdish capital Irbil, like most of his flock who made up the biggest part of the community of Qaraqosh. Days after the Iraqi military liberated Qaraqosh at the end of October he went back.

Women from Mosul relieved after liberation

"The first thing I saw was the hospital and I could not recognize it, the same for the church. I cried, that first feeling was so hard," he says, sitting in a portacabin near the Mart Shmony Church in Ankawa, where he offers church members help and assistance.

"They are angry that the government wants to clean up in Qaraqosh, to hide the crimes," Ammar explains. "We want to document everything, all the damage and destruction, before anything is cleaned. Already something has been changed, the IS slogans have been painted over."

Many of the IS fighters were locals from the surrounding villages, he says. They provided the leaders with fuel for electricity and food. "Houses became clinics and pharmacies. Some were stores for weapons. The Church of Mar Gorgis became a bomb factory."

All the houses were looted - just like the cemeteries where graves were opened to steal anything valuable buried with the dead. In one of the houses belonging to the church IS fighters kept several Yazidi women as slaves. 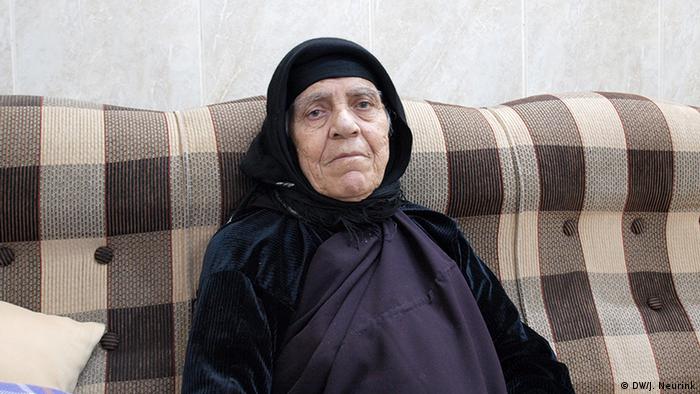 Zarifa Badoos Daddo, who lost her husband, lived through the occupation of Qaraqosh

Zarifa Badoos Daddo, 77, lived through it all, staying in her house in Qaraqosh during the IS occupation together with an even older friend, who was blind and deaf.

Daddo buried her husband in the first weeks after IS arrived. When the group evacuated the remaining 200 mostly elderly Christians, it seemed to have forgotten about Daddo and her companions. "They had registered us and told us they would let us go to Irbil. But they never came," she told DW. 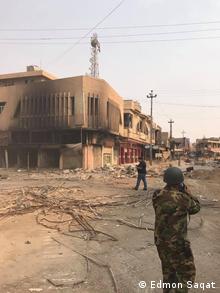 With water and electricity cut off, she and her friend only survived because fighters regularly brought them food, she recounts in her brother's house in Ankawa. She recognized many of them as locals from the villages, some were nice, joking with her and taking care of her. One of them warned her against going out to fetch water in her yard, as the coalition planes were always looking for movements on the ground.

From her window overlooking the town she saw the fighters moving around. "Some had a beard, some did not," she says. The young ones were the problem, she says, threatening her with their weapons and forcing her to convert to Islam. "A fake conversion," she calls it. They made her spit on her crucifix and stamp on a portrait of the Virgin Mary.

"Sometimes I asked Maryam, what am I, Muslim or Christian?" she recounts. "I could not sleep. Sometimes I felt I was going crazy and I hit myself."

Iraqi special forces have seized the abandoned Christian town of Bartella, despite some resistance. Iraq's prime minister claimed his country's troops were advancing faster than expected in the battle for Mosul. (21.10.2016)

Alongside Kurds and Shiites, Christian units are now also fighting against IS in Iraq. But Christians are forced to coordinate their efforts with the Kurds and the Iraqi government, both of which pursue their own goals. (23.08.2015)

Although her house is the only one in Qaraqosh that was not looted completely, fighters came time and again to demand her gold and money. Eventually they found the 15 million Iraqi dinars (over 11,000 euros) she had hidden in a pot in the fridge. Just days before the liberation a young man walked in and took what he wanted from the house.

When the liberation came with bombs and artillery, IS had not brought her food for weeks - the group's leaders had long since left. She saw the houses in her neighborhood being put on fire and was very sacred when the one attached to hers was torched. "That's when I saw they had broken through walls to be able to move from house to house without being seen."

The total number of Christians in the town still missing after the IS invasion varies between 30 to 70. Bodies are still being found. Faraj Saqat, 73, was discovered by his son Edmon buried in the front garden. "I saw some stones and his walking stick. It was a Muslim grave," Edmon told DW.

Edmon came from London to find his father having lost contact a year ago. He thinks he was buried last winter by a Muslim friend from one of the villages who passed by regularly. "He wore his winter clothes." He hopes to eventually bury him in the Qaraqosh cemetery: "He wanted to die in Qaraqosh. Once his body has been officially identified, we will bury him there."