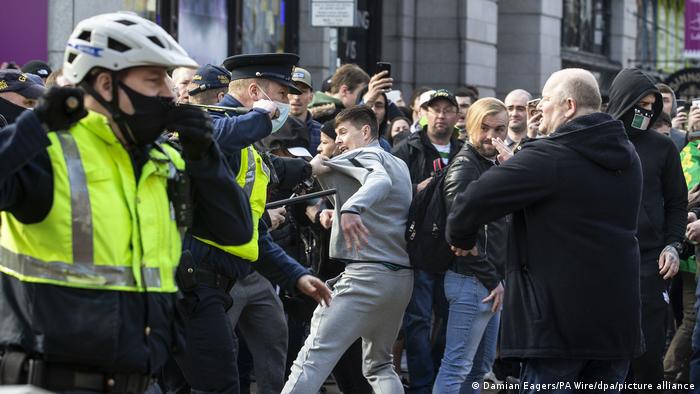 Hundreds of people on Saturday took to the streets of Dublin for a planned demonstration that quickly turned into violent clashes between protesters and police.

The protesters tried to march to a city center park to protest Ireland's coronavirus lockdown measures but were blocked from the area by the police.

They chanted "end the lockdown" and handed out leaflets that read, "Let Ireland live." Among the crowd were people wearing clothing with the logo of Ireland's far-right National Party.

The situation dramatically escalated after a man fired two firework rockets at the police at point-blank range. Videos of this attack at Dublin's Grafton Street have been widely circulated and condemned on social media.

Police subsequently charged the crowd with batons and arrested 23 people.

Several police were injured in clashes with the protesters and one of the officers had to be hospitalized.

Some of the protesters who had arrived were "obviously intent on violence," Police Commissioner Drew Harris told Irish broadcaster RTE.

"You don't carry fireworks to a protest for any other purpose than to engage in violent conduct," he said.

The large gathering and violence were condemned by Irish Prime Minister Micheal Martin as "totally unacceptable."

The protest "showed a complete lack of respect to the people who have made huge sacrifices during this pandemic," Martin said in a statement. "There can be no justification for the march or the violence that unfolded." 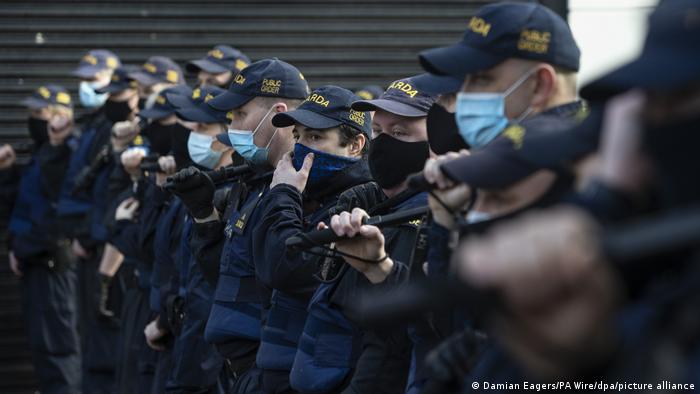 Several police officers were injured in clashes with the protesters

Justice Minister Helen McEntee said that a special court sitting was being arranged so that the people arrested were "prosecuted speedily."

Ireland is currently in the middle of its third lockdown, which the government on Tuesday extended a month to April 5. Schools, however, will gradually start reopening from Monday.

The country managed to keep coronavirus infection and death figures relatively low, but a relaxation of restrictions around the holiday season in December led to a surge in new cases.

According to Oxford University data, Ireland had the highest per capita infection rate in the world in early January.

In Brussels and Vienna, police have clashed with scores of protesters demonstrating against COVID restrictions. Belgium and Austria have imposed a curfew and lockdown to fight the spread of coronavirus infections.