Iraq's new Shiite prime minister has ordered the country's air force to halt bombardments of civilian areas. The move is part of an effort to gain support from Sunnis in the fight against "Islamic State" (IS) militants. 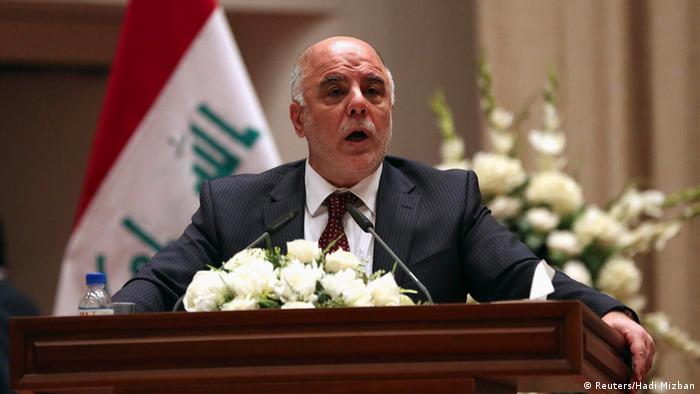 Prime Minister Haider al-Abadi said Saturday he had ordered an end to air strikes in populated areas to protect civilians and minimize casualties.

"I have ordered the Iraqi Air Force to halt shelling of civilian areas even in those towns controlled by ISIS," Abadi said on Twitter, referring to "Islamic State" (IS) by its former name.

Speaking at a conference in Baghdad, Abadi added, however, that the government would "not relent in its efforts to hunt down 'IS' members wherever they are."

Abadi heads a new cabinet approved by Iraq's parliament on Monday, and is tasked with rescuing his country from sectarian divisions, as IS continues its devastating campaign of terror across the region. The militant group has seized large swathes of territory in northern Iraq, and now controls about a third of the country. The CIA estimates the group has as many as 30,000 fighters in Syria and Iraq.

Sunni Muslim tribal figures have demanded an end to these types of military actions in civilian areas in return for their support of Abadi's new Shiite government and its campaign against IS.

"Protection of civilians and ensuring their safety and security is a paramount priority for the United Nations," he said.

"Iraq is facing a humanitarian catastrophe of immense proportion with exponentially rising numbers of displaced people, that should be settled in accordance with the citizens' human rights," he added.

One of Iraq's main Sunni parties, Mutahidoun, described the decision as a promising move that could help turn residents in Sunni-dominated areas against IS fighters.

"The prime minister issued his decision to halt shelling civilian areas and this will definitely help isolate terrorist groups and lead them to be targeted by the people of the area itself," it said in a statement.

Francois Hollande has expressed his country's support for Iraq's new government. The French president's trip to Baghdad came as France was considering joining a US-led bombing campaign on Islamist extremists. (12.09.2014)

US Secretary of State John Kerry said Washington and the international community will not stand by and watch the "Islamic State" militant group grow. President Barack Obama is due to address the issue later on Wednesday. (10.09.2014)