Anti-government demonstrations have again resulted in protesters' deaths in southern Iraq. The violence comes a week before a visit by the Pope. 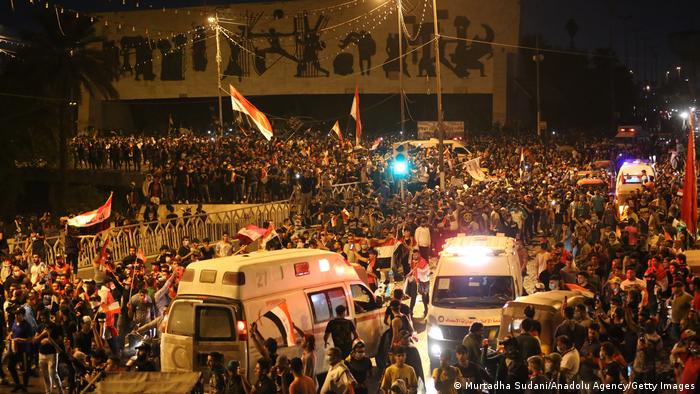 Protests in southern Iraq had died down during the pandemic but have begun to pick up steam again, as seen in Wednesday's protest in Baghdad (pictured)

At least four anti-government protesters were killed and many more injured on Friday after security forces fired on crowds in the southern Iraqi city of Nasiriyah, witnesses told news agencies.

A hospital source told Reuters that most of the protesters had died from bullet wounds and that around 120 more had been wounded. At least 57 members of security forces were also injured.

Demonstrations have been defying lockdown measures and a second wave of coronavirus infections to call for the resignation of Nazem al-Waeli, governor of the Dhi Qar governorate.

The protests have focused on the deteriorating public services in the region. Security forces fired on crowds on Sunday as protesters had been attempting to storm government buildings with rocks and Molotov cocktails.

Protesters had closed down the city's main bridges at which point security forces opened fire with live rounds to disperse the crowds.

Amnesty International's Iraq office confirmed that protesters had been killed after obtaining a video of the events.

"Amnesty has also verified videos from Nasiriyah that contain clear audio of gunfire and show police firing weapons as well as dead protesters in the streets," the organization said in a tweet.

Another tweet called on the Iraqi government to end the "bloodshed" after failing to "address the impunity with which protesters are being killed."

Southern Iraq has been a hotbed of protest in recent years after decades of conflict and neglect have left public services in a dire situation. Residents complain about polluted water and only having several hours of electricity per day.

Large-scale protests in late 2019 led to the resignation of the former prime minister, Adel Abdel Mahdi. Almost 600 people were also killed over months of ongoing violent protests. Nine people were killed in Nasiriyah in November.

Current prime minister, Mustafa al-Kadhimi, who replaced Mahdi in May 2020, promised to seek justice for fallen activists but prosecutions have yet to begin.

Friday's violence came a week before Pope Francis plans to visit the region in the first-ever papal visit to the country.