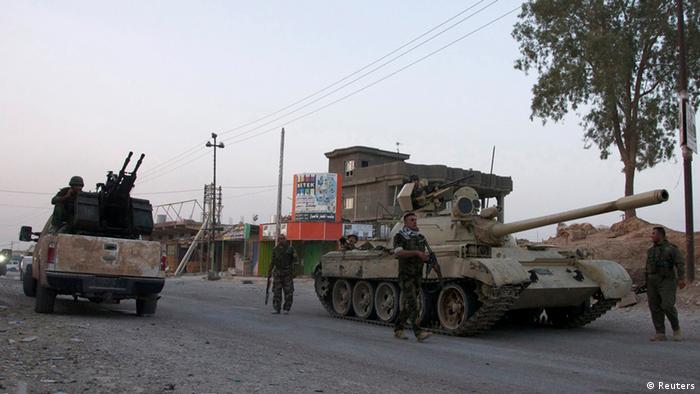 On Wednesday, Iraqi Prime Minister Nouri al-Maliki accused Kurdish leaders of allowing their region to become a haven for fighters for the "Islamic State," until recently known as ISIS, an Arabic acronym for the Islamic State in Iraq and the Levant.

"We cannot stay silent as (Kurdish capital) Erbil is turning into a headquarters for operations pursued by the Islamic State, the outlawed Baath, al Qaeda and terrorists," Maliki said Wednesday, vowing action, though he did not provide any evidence to support his allegations.

"The Kurdistan region has never harbored any terrorists, now or ever, because we have been the victim of them before," Dizayee said. "What Mr. al-Maliki is talking about is far from reality."

In power since 2006, Maliki, a Shiite Muslim, faces stiff opposition in his bid for a third term. His critics accuse him of monopolizing power and marginalizing Iraq‘s Sunni Muslim minority.

Whether Maliki will continue as prime minister has dominated talks on forming a new government that would represent Iraq's major ethnic groups. Those talks have reached an impasse more than once.

Meanwhile, south of Baghdad on Wednesday, Iraqi police announced that they had found 53 dead bodies with their hands tied and shot in various places.

The archbishops of Baghdad, Mosul and Kirkuk have said that Christians could completely abandon Iraq. War and sectarian conflict have shrunk the population to about 400,000 Christians from the 1.5 million there before the US-led invasion in 2003. Now even those who stayed through the worst of it have begun to leave for Turkey, Lebanon and Europe, the prelates said on a visit to Brussels Wednesday to seek EU help.

"Europeans have a moral duty vis-a-vis Iraq," said the country's most senior Christian leader, Chaldean Patriarch Louis Sako, who flew into Brussels to meet with EU officials, including European Council President Herman Van Rompuy. At a news conference on Wednesday, Sako called himself "extremely anxious" about the fate of Christians fleeing areas held by ISIS fighters, though they "so far have not been targeted as a group."

Kirkuk's Chaldean Catholic archbishop, Youssif Mirkis, added that, even in the safer Kurdish zone, he has seen members of the community leave at a rate of several hundred a day: "Our presence was a symbol of peace, but there's so much panic and few Christians see their future in Iraq," he said.