Iraqi Christians fear escalating persecution as US forces withdraw | World | Breaking news and perspectives from around the globe | DW | 09.10.2010

As US forces continue to withdraw from Iraq, many fear a return to sectarian violence once they've gone. Iraqi Christians are particularly fearful of the removal of the main barrier between them and their persecutors. 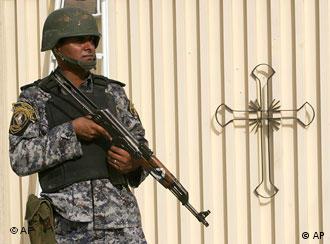 The protection of Christians may not be a priority in Iraq

Their churches are burnt-out husks and heaps of rubble. Their businesses are targeted by extremists. Their leaders are kidnapped and assassinated. The Christian minority in Iraq, once a community left in peace to prosper, continues to be under threat from a campaign of persecution which has forced as many as 500,000 Christians to flee the country.

During the reign of Saddam Hussein, the estimated 1.4 million Christians - many of them Chaldean-Assyrians and Armenians, with small numbers of Roman Catholics - were generally left alone if they didn't oppose the government and they lived in relative peace with the country's Sunnis and Shiites.

Some, such as Tariq Aziz, Saddam's foreign minister and deputy prime minister, rose to the highest levels of power.

Things changed after the 2003 US-led invasion of Iraq toppled Saddam's regime. Christians became a target of violence when Islamist groups and ordinary Muslims angered by the military action began seeing them as the enemy, associating with them with the "crusaders" - the invading armies of the United States and Britain.

Tensions over their religious ties with the West and their differing beliefs to the strict Islamic majority, which had been simmering for years, spilled over as the occupying forces dug in.

"Iraqi Christians became caught up in the overlapping violence and multiple conflicts unleashed after 2003," Dr. Kristian Ulrichsen, an Iraq expert at the London School of Economics and Political Science, told Deutsche Welle. "They became exposed to the similar patterns of kidnappings, extortion, beheadings, rape and forced taxation that affected all other communities as the erosion of central government control left a security vacuum that was exploited by organised and opportunistic criminality and anti-occupation resistance groups."

"In addition to this, Christians specifically were targeted by Church bombings and assassination attempts owing to a perceived association with the aims and intentions of the occupying forces."

In 2004, insurgents launched a coordinated bombing campaign targeted churches in Baghdad. In 2007, after Pope Benedict XVI made comments perceived to be anti-Islam, nationwide attacks on churches hit an all-time high and a priest in the northern city of Mosul was kidnapped and later found beheaded. In January 2009, 40 Iraqi Christians were killed and approximately 12,000 fled their homes. 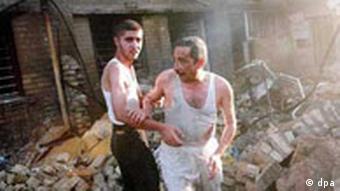 Churches have been targeted since the 2003 US-led invasion

In February this year, at least 10 Iraqi Christians were killed by unknown gunmen in Mosul as the country was preparing for the March 7 elections. The escalating violence ahead of the ballot led to hundreds of Iraqi Christians taking to the streets in a number of protests, chanting slogans such as "Stop the killing of Christians."

During the years since the invasion, life for the Christian minority has become beset by danger. The waves of violent attacks against churches, businesses and homes have forced more than half of the Christian population to flee for their lives, according to statistcs from the UN High Commission for Refugees (UNHCR). Those churches which remain standing are mostly empty, their congregations long gone or too afraid to attend.

"The Christian minority in Iraq has been reduced to a shadow of its former self," said Ulrichsen. "Up to two-thirds of the pre-war community has been displaced or forced to flee the country. Although conditions in Iraq have improved somewhat since 2007, the security situation remains intensely fragile and prone to reversal, and the return of refugees and displaced persons to their homes has been very slow and halting."

"There's a real possibility that 2,000 years of settlement by Christian communities in Iraq is in danger of near-total extinction." 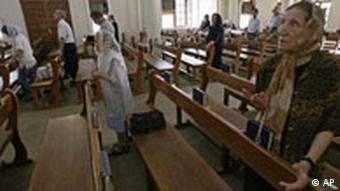 Congregations have dwindled through fear and exodus

"The greatest concern about a US pullout is that extremists will exploit any lapses in security and attack vulnerable groups, including Christians," Samer Muscati, an Iraq expert from the Middle East division at Human Rights Watch, told Deutsche Welle.

"Although the Iraqi government publicly condemns violence against Christians and other minority groups, it has not taken measures to bolster security in areas where minorities are particularly vulnerable to attacks, and it has not thoroughly investigated attacks," he added. "Iraqi security forces rarely apprehend, prosecute and punish perpetrators of such attacks, which has created a climate of impunity."

Christians search for ways to protect themselves

One muted proposal to protect the Christian minority involves the creation of an autonomous province on a neglected area of land located to the north and west of Mosul, called Ninawah Plain, which would act as a sanctuary. 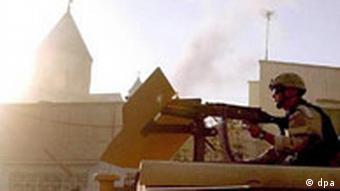 Christians look for protection away from high-risk areas

While advocates of the idea say it wouldn't stop the violence against Christians in the large, high-risk cities of Mosul, Baghdad, and Al-Basrah, it would give the Christians a place where their needs could be met, their beliefs supported and their security guaranteed.

The proposals suggest that Ninaweh Plain would an autonomous administrative region in which the Christian minority could govern themselves and would be free to participate in the federalist system which is developing in Iraq.

However, the idea of an autonomous region for the Christian minority in reality looks unviable.

"The image of a real autonomy is unrealistic," Nizar Hanna, director of the Assyrian Democratic Movement's Baghdad office, told Deutsche Welle. "Up to now, there are no concrete plans which show how this would work. Even in the Kurdish constitution, they have the right to autonomy in the areas where they are the majority but nowhere is this the case. Besides, there are no areas in which only Christians live. Shabak, Yazidis, Kurds and Arabs also live there."

"To an extent a safe haven for Christians exists in Iraqi Kurdistan," Kristian Ulrichsen said. "Thousands of internally displaced Iraqi Christians have moved there. Although viable on humanitarian grounds, the creation of a specific region for Christians would be a short-term measure that does not offer a longer-term solution to the reconstruction of Iraqi society and the reintegration of its communities."

The Archbishop of Baghdad has used a visit to Germany to call on Europeans to help his country improve security in his home country, especially for vulnerable minority groups. (23.07.2009)

German clergy, human rights activists and politicians want Germany to lead the way in setting an example for the European Union in showing generosity towards Iraqi refugees escaping persecution in their country. (23.09.2008)

DW spoke with Middle East expert Kamal Sido about the fate of the Christian minority in Iraq after EU ministers this week dropped calls to take in more Iraqi refugees. (26.07.2008)