Baghdad Archbishop describes situation in Iraq as ″anarchy″ | World | Breaking news and perspectives from around the globe | DW | 23.07.2009

The Archbishop of Baghdad has used a visit to Germany to call on Europeans to help his country improve security in his home country, especially for vulnerable minority groups. 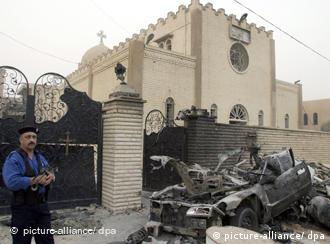 Archbishop Jean Benjamin Sleiman told Deutsche Welle that his country is slipping into a state of anarchy, and that the government has no control of the violence within its borders.

In Germany he has spoken out against attacks on seven churches in Iraq, which killed four people and injured some 30 others.

One of the main reasons the government can't protect its citizens, said Sleiman, is that it must first protect itself.

"The Iraqi government still has no control over all Iraq," he said. "I hope the situation will change, but until now, the government forces must protect themselves before others. They are losing time and are losing energy for self-defense more than to protect society itself."

While all Iraqis have been affected by the unrest in the country, minority groups have been instrumentalized by insurgents, with the latest bombings targeting churches in the capital Baghdad.

Before the US-led invasion in 2003, over one million Christians lived in Iraq. The latest figures indicate that at least half of these have now fled to neighboring Syria and Jordan, where they are living in squalid refugee camps. 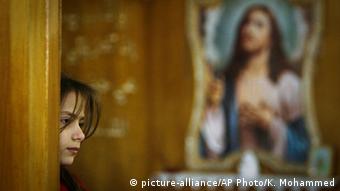 Almost half of Iraq's Cristians have fled the country

But Sleiman said that Iraqi society needs reconciliation before Christians, or anyone else, can benefit from government protection.

"I am asking first for aid for Iraq," he said. "I think to help Christians means to help Iraq itself. The European Union and churches can help the government by pushing Iraq to more democracy and more freedom."

Not just a Christian problem

Sleiman stressed that the violence is not only directed at Christians.

"It's not only Christians that have had enough of the violence," he said. "The violence against Muslims, in percentage, is superior. This is the drama of minorities. It isn't the number of victims."

"After three wars, after 12 years of embargo, after this anarchy we have been living in since the collapse of regime, this population is exhausted," he said.

Sleiman has called for international support in solving the deteriorating situation in Iraq, which he says has its roots in the greater Middle East conflict.

With the election of a successor to head the IAEA, Mohamed ElBaradei is preparing to leave the post he has held for more than 10 years. He faced many challenges, but he will be remembered mainly for one thing. (02.07.2009)

The US is confident that Iraqi security forces are ready to take over responsibility for the country's cities when American troops pull back to surrounding areas. But some military and political concerns remain. (29.06.2009)

An inquiry committee investigating the involvement of German spies in the Iraq war has presented its findings, with members disagreeing on whether former chancellor Schroeder helped oust Saddam Hussein. (19.06.2009)