Parliamentary inquiry inconclusive over Germany′s role in Iraq war | Germany | News and in-depth reporting from Berlin and beyond | DW | 19.06.2009

An inquiry committee investigating the involvement of German spies in the Iraq war has presented its findings, with members disagreeing on whether former chancellor Schroeder helped oust Saddam Hussein. 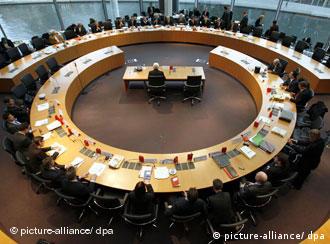 The Schroeder government is in the dock over the Iraq War

After hearing 140 witnesses over more than three years, an inquiry committee of the German parliament has presented a final report, in the form of a volume running to 2,500 pages.

The committee had sought to establish whether agents of the German foreign intelligence service BND helped the Bush administration wage the Iraq war.

In spite of the "gigantic expenditure", the committee produced only "meagre results" and couldn't "clear up key questions", said committee chairman Siegfried Kauder of the Christian Democratic Union CDU.

Another focus of the investigation was the alleged failure of the previous government of Social Democrat (SPD) chancellor Gerhard Schroeder to press for the release of two Germans and a Turk held captive by the United States at the Guantanamo Bay detention facility.

In their final report the committee members disagreed on the question of whether two BND spies, resident in Baghdad in March 2003, had provided crucial information to the United States' Central Intelligence Agency (CIA) in support of US Air Force combat operations.

In December 2008, US General Tommy Franks told the German "Spiegel" newsmagazine that "these guys were invaluable" for the US bombing campaign against targets in Baghdad.

CDU committee members, as well as those of the liberal Free Democrats (FDP) and the environmentalist Green Party consider this to be "an indirect participation by Germany in the Iraq war".

But SPD committee members claim the information the BND operatives had given "did not violate the Schroeder government's anti-war policy on Iraq", as it was "intended to save only civilian installations from damage".

The "Taliban" from Bremen 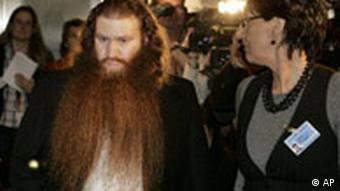 The CDU and the SPD, however, were in full agreement on the case of Murat Kurnaz, a German resident with Turkish citizenship held at Guantanamo, as well as on German cooperation in the CIA‘s rendition flights of terror suspects.

Kurnaz, who has come to be known as the "Bremen Taliban" (a reference to his German hometown), was held at the Guantanamo Bay military prison from 2002 until 2006.

He claimed that he was tortured by the CIA and interrogated several times by German BND agents.

The German opposition parties - the FDP, the Greens and the Left Party - accuse the previous government of prolonging Kurnaz's suffering by refusing to allow him back into Germany after US officials had established his innocence and had officially requested for Germany to take him back.

"This is a clear case of failure to render assistance, for which Frank-Walter Steinmeier must accept responsibility," said Christian Stroebele of the Green Party.

At the time, Steinmeier, the current German foreign minister, was Chancellor Schroeder's chief of staff and in charge of coordinating the work of German intelligence services.

But the CDU and the SPD - the ruling parties in the current grand coalition government - argue that neither Steinmeier nor the Schroeder government as a whole could be blamed for the fate of Murat Kurnaz "as the Turk was not a German citizen at the time" and because it was difficult to establish "how dangerous he really was."

The two governing parties also white-washed the Schroeder government in the cases of two other German terror suspects.

One involved Khaled el-Masri, a Lebanese-born German, who was abducted by the CIA in Macedonia in 2004 and flown to Afghanistan for interrogation. He was later released.

Another victim of CIA rendition was Mohammed Haidar Zammar, a Syrian-born German who was kidnapped in Morocco in 2001 and taken to Syria. He is currently serving a 12-year prison sentence for allegedly belonging to a terrorist group.

Steinmeier not quite off the hook 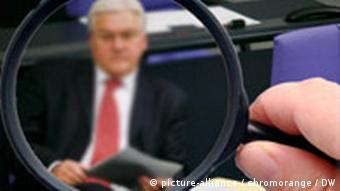 Foreign Minister Steinmeier is in the focus of the parliamentary investigation

During the past three years, the inquiry committee heard evidence from 140 witnesses including prominent politicians such as Foreign Minister Frank-Walter Steinmeier himself and his predecessor Joschka Fischer from the Green Party.

Steinmeier was subject to close public scrutiny, as he's the SPD's candidate for chancellor in September’s general election in Germany.

The Greens' Christian Stroebele insists Steinmeier is a key figure in the scandals surrounding Germany’s involvement in the US-led war on terror.

As Schroeder's right-hand man for intelligence matters, "he clearly failed to inform Joschka Fischer about the BND‘s activities," Stroebele said.

He added that he hoped that the parliamentary investigation would bring more transparency into the work of the German intelligence services and said: "This has been a healing experience for these people."

The only tangible results of the committee's findings so far have been a ban on domestic intelligence spies being used to interrogate people abroad, and the introduction of greater powers for parliament to control Germany’s intelligence services.

German Foreign Minister Frank-Walter Steinmeier faced hard questions Thursday about Germany's role in the US-led "war on terror." The stakes are high for Steinmeier, who would like to become Germany's next chancellor. (18.12.2008)

Germany's foreign minister has denied he caused an innocent German-born Turk to be imprisoned for years at the US Guantanamo Bay prison. DW's Marcel Fürstenau says many questions still remain unanswered. (30.03.2007)

With Foreign Minister Frank-Walter Steinmeier implicated in Berlin's alleged failure to accept an offer from the US in 2002 to release Murat Kurnaz from Guantanamo Bay, DW takes a look back at the controversial case. (25.01.2007)