Iraq sentences 16 Turkish women to death over IS ties

Despite condemnation from rights groups, Iraq has been fast-tracking trials for women who were involved in "Islamic State's" reign of terror. The women have one month to appeal their sentences. 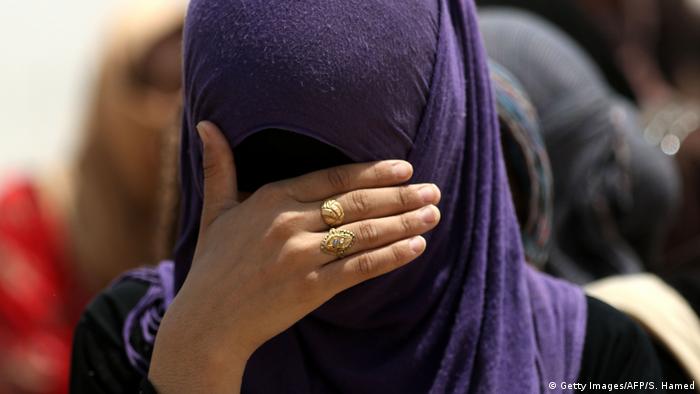 A court in Iraq sentenced 16 Turkish women to death on Sunday after they were found guilty of belonging to the "Islamic State" (IS) terror group. Baghdad is in the midst of a huge push to bring hundreds of foreign women to trial after IS strongholds in the country crumbled last year.

Some of the women, between the ages of 20 and 50, were accompanied by young children.

The women told the court that they had entered Iraq illegally to be with their husbands who had left to join IS, which at the time was gaining significant ground in Iraq and Syria. One woman told the judge that she had actively taken part in the fighting.

Iraq has detained 560 women and 600 children over alleged links to IS, and has moved quickly to put them on trial. In January, a German woman was given a death sentence for aiding IS, and a 17-year-old German who married an IS fighter was given a 6-year jail term last week.

Human Rights Watch has argued that the sentences are "unfair," with some activists arguing that many of the women were tricked or coerced into joining the terrorist groups.

Aside from the women held by the Iraqi government, officials in Iraqi Kurdistan say that 1,300 women and children surrendered to Kurdish peshmerga forces in August. Estimates suggest that there are 20,000 people held in custody in Iraq over IS ties, but there is no official number.

The women sentenced on Sunday have a month to appeal their verdicts, a court official said.

In a televised interview, Linda W. has broken her silence on joining the "Islamic State" militant group. As she faces a possible death sentence in Iraq, Germany must answer the question: Is she a victim or a perpetrator? (15.12.2017)

Human Rights Watch has interviewed dozens of "jihadi" brides at detention camps in Syria who want to return home, including at least 15 Germans. Several countries called for ex-IS members to be tried in Iraq and Syria. (10.02.2018)