Rockets struck an American airbase in the Kurdistan region of northern Iraq, killing one foreign civilian contractor. It was the deadliest attack on US-led forces in nearly one year. 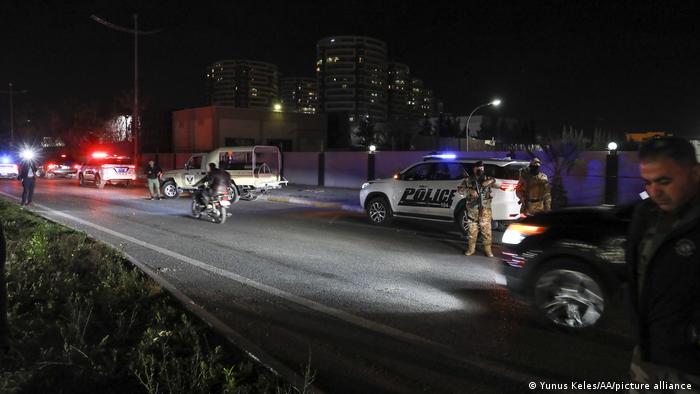 The Erbil International airport in Iraq's Kurdish region was shut down and flights were halted for safety issues, security officials said.

Several rockets hit the semi-autonomous Kurdistan region of Iraq on Monday, killing one foreign civilian contractor, and wounding five others, and one US soldier, the US-led coalition said.

The spokesman confirmed that the contrator killed was not an Iraqi, and reportedly not an American either. Four of the five injured contractors, however, were US nationals, according to US media reports.

At least three rockets landed near the civilian airport in the Kurdish regional capital of Erbil, where foreign troops are based as part of an international alliance fighting the Islamic State group.

Security officials said the Erbil airport was shut down and flights were halted for safety issues.

The rockets were launched from an area south of Erbil near the border with Kirkuk province and hit residential neighborhoods on the city's outskirts, causing material damage to cars and other property.

According to a statement from the Kurdish interior ministry, a number of rockets were fired towards Erbil and its outskirts around 9:30 pm local time and some people were wounded.

It added that security agencies have launched a "detailed investigation" and urged civilians to stay home until further notice.

Iraqi President Barham Saleh said the attack marked a "dangerous escalation" and called it a "criminal terrorist act," in a tweet.

He said he spoke to Iraqi Prime Minister Mustafa al-Kadhemi so that security forces based in Erbil and Baghdad could cooperate on the investigation.

Barzani also said he had spoken to US Secretary of State Antony Blinken and "agreed to coordinate closely in the investigation."

Blinken said the United States is "outraged" by the incident, adding that Washington would support all efforts to "hold accountable those responsible" for the attack.

The German Foreign Ministry released a statement saying it "stands on the side of the Iraqis in the fight against terrorism."

The attack was the deadliest to have hit US-led forces in Iraq for almost a year during which conflict in the region has escalated between American forces, their Iraqi and Kurdish allies on one side, and Iran-backed militia on the other.

It was the first time in nearly two months that a Western military or diplomatic installment was targeted in Iraq. This was also the first attack on the Erbil airport in five months.

A group calling itself Saraya Awliyaa al-Dam or "Guardians of Blood" claimed responsibility for the attack, saying it targeted the "American occupation" in Iraq. It provided no evidence for its claim.

Dozens of such groups have cropped up over the past year claiming responsibility for such attacks, but the US and Iraqi forces believe them to be fronts for prominent pro-Iran factions including Kataeb Hezbollah and Asaib Ahl al-Haq.

Both groups have been blamed for a series of rocket attacks that have hit the US embassy in Baghdad since January 2020, after Washington assassinated Iranian general Qasem Soleimani at Baghdad airport.

Most of the rocket attacks have targeted the Iraqi capital of Baghdad, but Iranian forced fired missiles at the Erbil airport days after Soleimani's killing.

Dwindling US forces in Iraq

The US-led coalition has drawn down to under 3,500 troops in total — 2,500 of them Americans — since Iraq declared victory against IS in late 2017.

However, the rocket attacks have continued despite Washington drawing down its forces. Under President Donald Trump, the US had vowed that the killing of an American national in a rocket attack would prompt a mass bombing campaign in Iraq.

It not yet clear whether the Biden administration would stick to that policy.

In October, Washington threatened to close its embassy in Baghdad unless the attacks stopped. The Iraqi government brokered an indefinite truce with the hardline groups and the rocket attacks have since come to a near halt.

The Turkish government has accused members of the outlawed Kurdistan Workers' Party (PKK) of killing 13 kidnapped Turks in Iraq. The PKK blamed the deaths on Turkish airstrikes.

Do the violent protests in northern Iraq signal a 'Kurdish Spring'?

The politics are the same; protesters' demands are, too. But this time — due to demographics, falling oil prices and the coronavirus pandemic — it's different, locals in Iraqi Kurdistan say.